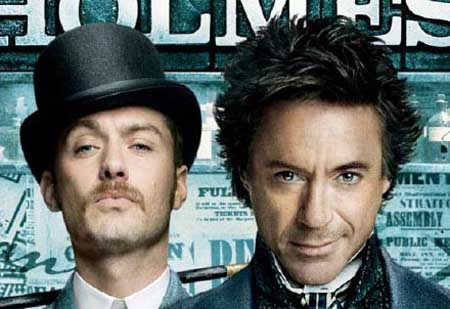 The first TV Spots for Guy Ritchie’s upcoming action adventure “Sherlock Holmes” have been released. Check them out below.

The latest film adaptation of author Arthur Conan Doyle’s fictional detective character revolves around Holmes and Watson as they try to stop a conspiracy that could destroy Britain, opening with Holmes apprehending cult leader ‘Lord Blackwood’ (Mark Strong), who promises he will return from the dead and exact his revenge, while being led to the gallows.

Warner Bros is already moving forward with Guy Ritchie’s adaptation of “Sherlock Holmes” sequel by hiring Kieran and Michele Mulroney (Justice League: Mortal) to write the script, with Brad Pitt in negotiations to come aboard. This will be the first time they have worked together since “Snatch.”