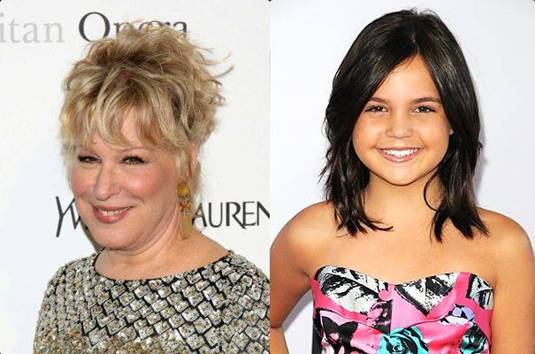 Showbiz vet Bette Midler and child actress Bailee Madison have reportedly signed up as the latest cast additions for the new 20th Century Fox family comedy Us & Them opposite Billy Crystal. The film finds the humor in the old school view of how the new school parenting gets by, with Midler as Diane and Crystal as Artie Decker, playing a recently separated couple dealing with their three grandchildren for a week, with awful results. Crystal stars as a baseball broadcaster and Madison, who rose to fame after starring in Brothers, will play one of his grandchildren. Andy Fickman (You Again) will be directing from a script written by Crystal’s old City Slickers friends, Lowell Ganz and Babaloo Mandel. Actually, Ganz and Mandel re-teamed to write the final draft from the original draft written by Lisa Addario and Joe Syracuse and based upon the story from Crystal and Samantha Sprecher. Production is due to begin later this month in Atlanta. Earlier this year, Than She Found Me star Midler was forced to drop out of David Mamet’s biopic about Phil Spector’s murder trial  and seeing her and Crystal (whom we don’t get to see much of, too) should be a lot of fun and will, hopefully, deliver better results than Fickman’s last effort. Check out young Madison in a creepy remake from producer Guillermo del Toro and watch Bette Midler in the trailer for the funny drama about love and destiny in which she plays a self-centered talk show host who’s not exactly the ideal mom. [youtube]http://www.youtube.com/watch?v=mFE4lGvRt8E[/youtube]

Don’t Be Afraid of the Dark Trailer

Then She Found Me Trailer