We’re here to start a little chat about the upcoming Mega Spider movie. As you probably know, this sci-fi thriller (or horror?) comes from director Mike Mendez, the project is currently in post-production, but we finally have a completely new image from the whole thing, and as usual – we’re here to share it with you! A giant alien spider terrorizing the city of Los Angeles? That should be fun! Just kidding. 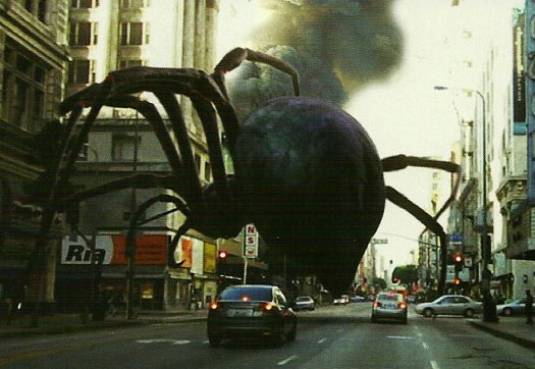 Written by Gregory Gieras, Mega Spider will tell us the story of a 50 foot tall alien spider who escapes from a military lab and rampages the city of Los Angeles. But you have nothing to be afraid about – there’s also a great team of scientists, soldiers, and even one clever exterminator who will (just a wild guess) kill that damn thing before the city is destroyed.

Surviving extermination by nuclear eradication, a horrible alien mutation in arachnid form is now growing at an exponential rate and making its way toward downtown Los Angeles. Hot on its spindly heels is a crack military unit with absolute authority, led by an obsessively driven commander and his beautiful but lethal sidekick. Unfortunately for them, this mutant spider has an array of deadly defenses including the ability to virtually disappear through camouflage. But the creature’s real adversary quickly turns out to be a hot-shot local exterminator armed only with cocky attitude, some fast one-liners and his homemade gadgets. Joining forces with the military team, this blue-collar hero sets out to exterminate what has now become a monstrous 10-story tall Mega Spider!

Make sure you let us know what you think about these images, and as usual – stay tuned for more updates!

Trailer For Andres Ramirez’ Horror UNKNOWNS, Because Some People Are Dying To Be Famous!
New Concept Art For Pixar’s Movies For 2013 And Beyond
Advertisement