Get ready guys, revenge is coming this Friday! Dead Man Down (finally) opens in two days, and we’re here to take a last look at Niels Arden Oplev‘s leading duo – Farrell and Rapace. In other words, make sure you check out the rest of this report to find a brand new red band trailer for the whole thing! Once again, we will remind you that this action thriller stars Colin Farrell and Noomi Rapace as two strangers whose mutual desire for revenge draws them together and triggers an escalating trail of mayhem. [youtube]http://www.youtube.com/watch?v=BI2ruUmvuKU[/youtube]

Victor, a rising gangland player, has infiltrated the crime empire run by ruthless kingpin Alphonse, with the single purpose of making Alphonse pay for destroying his once happy life. As he meticulously orchestrates his vengeance from his high-rise home, Victor watches and is watched by Beatrice, a mysterious young woman who lives in the apartment across from his. On the surface a fragile woman-child, Beatrice seethes with a rage of her own. When she uncovers Victor’s dark secrets, she threatens to expose him unless he helps her carry out her own campaign of retribution. Each fixated on avenging the past, they devise a violent and cathartic plan that could change their worlds forever…

Beside Farrell as Victor and Rapace as Beatrice, Dead Man Down also stars Terrence Howard, Dominic Cooper and Isabelle Huppert, and the movie hits theaters on March 8th, 2013. 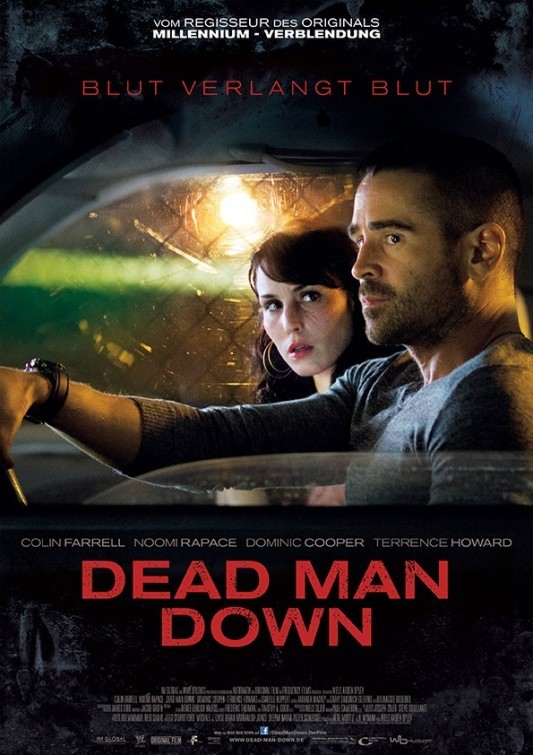