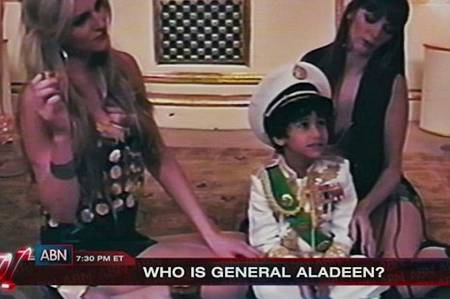 With its theatrical release date getting closer and closer, Paramount Pictures has just debuted the opening scene of Sacha Baron Cohen’s fourth movie, The Dictator. Cohen’s latest film, loosely based on ‘Zabibah and the King’ by Saddam Hussein, marks his first foray into scripted comedy. The Dictator also features Bobby Lee, Kevin Corrigan, J.B. Smoove, Megan Fox, Ben Kingsley, Anna Faris, Jason Mantzoukas, B.J. Novak, John C. Reilly, Adeel Akhtar, Fred Melamed and Aasif Mandvi. A satire of Middle Eastern dictators (Saddam Hussein and Muamar Ghaddafi) opening scene takes the form of a TV news. One segment profiling Admiral General Aladeen, who took over at the age of seven and changed a number of words in the country’s national language to his own name, including the words for both ‘positive’ and ‘negative.’ The confusing results are shown in a doctor’s office where a man learns he is HIV Aladeen, and is unsure whether to be happy or sad. In this way, Cohen’s attempting to follow in the footsteps of Charlie Chaplin, maker of The Great Dictator, a satire of Hitler and the Nazi era in Germany. The film, directed by Larry Charles, opens wide May 16th and was shot in New York, the Plana de Espana in Seville and on the island of Fuerteventura. Get a first look at the opening scene. [youtube]http://www.youtube.com/watch?v=XbOdNKN88VA[/youtube]
Continue Reading
Advertisement
You may also like...
Related Topics:Aasif Mandvi, Anna Faris, Ben Kingsley, Jason Mantzoukas, John C. Reilly, Larry Charles, Sacha Baron Cohen, The Dictator