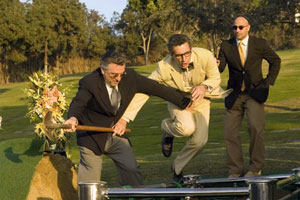 “What Just Happened?” Barry Levinson‘s tale of an embattled Hollywood producer, has been chosen to close this year’s Festival de Cannes. The movie, written by Art Linson and based on his memoir about his experiences as a producer, stars Robert De Niro as Ben, whose professional and personal life comes undone during one turbulent week. In a life-imitating-art turn, the film’s climactic scene takes place at the Festival de Cannes, with the fictional movie-within-a-movie that Ben has produced opening the festival. The official announcement is expected sometime next week. “Happened” also stars Catherine Keener as a tough-as-nails studio chief and features a number of stars, including Sean Penn and Bruce Willis, playing themselves in self-parodying roles. The 2929 Prods. film generated strong buzz coming in to January’s Sundance Film Festival, with co-reps CAA and Cinetic expected to fetch at least a significant seven-figure price for it. But the movie received a mixed critical response and failed to catch fire with distributors, and its rights remain available. The Cannes slot will represent a do-over of sorts on the acquisitions front, though it was unclear at press time who would rep it on the Croisette. 2929 was behind last year’s big Cannes sale, James Gray‘s crime drama “We Own the Night,” which went to Sony in a reported eight-figure deal.
Continue Reading
Advertisement
You may also like...
Related Topics: