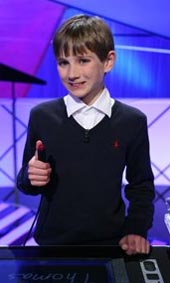 Extremely Loud and Incredibly Close update, guys! We all know that Stephen Daldry’s adaptation of Jonathan Safran Foer’s novel is coming, and we also know that Tom Hanks and Sandra Bullock are attached to star in it. Now we had a chance to hear 12-year-old Thomas Horn will costar with them. Just in case you’re interested, Horn’s previous claim to fame was winning $31,800 on Jeopardy! after scoring $12,000 in the final wager…. According to some reports, “…Daldry needed an exceptionally intelligent kid to play Oskar Schell, the bright and precocious 9-year old whose father is killed in the World Trade Center collapse. The youth finds a key left behind in his father’s belongings, and sets out on a cathartic journey to uncover the lock.” Is young Thomas good enough for the role? Let’s wait and see, but he’s definitely very cute little guy… Check out the Extremely Loud and Incredibly Close synopsis: “Jonathan Safran Foer emerged as one of the most original writers of his generation with his best-selling debut novel, Everything Is Illuminated. Now, with humor, tenderness, and awe, he confronts the traumas of our recent history. Nine-year-old Oskar Schell has embarked on an urgent, secret mission that will take him through the five boroughs of New York. His goal is to find the lock that matches a mysterious key that belonged to his father, who died in the World Trade Center on the morning of September 11. This seemingly impossible task will bring Oskar into contact with survivors of all sorts on an exhilarating, affecting, often hilarious, and ultimately healing journey.” Stay tuned for more updates!
Continue Reading
Advertisement
You may also like...
Related Topics:Extremely Loud and Incredibly Close, Sandra Bullock, Stephen Daldry, Thomas Horn, Tom Hanks