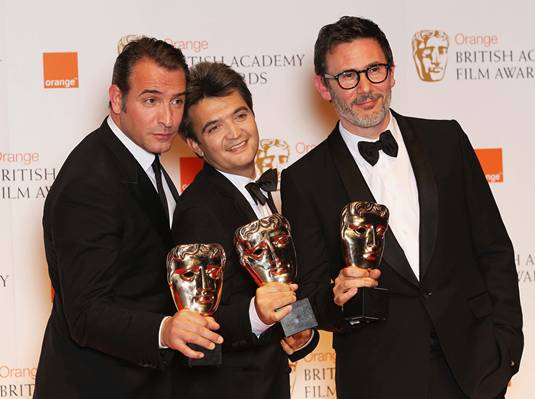 The BAFTAs, the British version of the Oscars, were handed out on Sunday giving us a possible indicator of those who could take home Academy Awards statuettes in just a couple of weeks. The black-and-white film The Artist was not only won Best Film at the BAFTAs, but took home awards for director, screenplay, cinematography, music and costume design by voters from the British Academy of Film and Television Arts. Jean Dujardin also won the Leading Actor. The Artist’s Berenice Bejo couldn’t defeat Meryl Streep, however, who won the best actress award for her performance as Margaret Thatcher in The Iron Lady (and lost a shoe as she went to accept her award). Martin Scorsese‘s Hugo won awards for its sound and production design as well as he was also honored with Academy Fellowship, an honorary award given for ‘outstanding and exceptional contribution to film.’ John le Carre adaptation Tinker Tailor Soldier Spy won an award for its screenplay and for Outstanding British Film too, an award that usually goes to a film that is nominated for, but does not win the Best Film award with the exception of last year’s winner The King’s Speech.