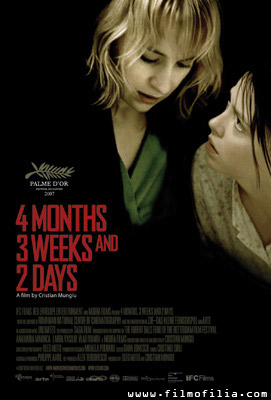 The setting for this grippingly horrible movie is Romania, in 1987: that is, two years before Nicolae Ceausescu was executed, but nine years after he was awarded an honorary knighthood by the Labour government of James Callaghan – and 20 years after he had outlawed abortion in Romania to increase the birth rate. It all seems at once a very distant and very recent era, and I can’t think of a film that has shown life in the eastern bloc more fiercely than this; without ever being overtly political, it makes you feel humanity itself being coarsened and degraded by the state. In recent memory, we’ve seen The Lives of Others and Good Bye Lenin!, which affected to be about the last days of European communism, and they have been very effective in their own differing ways, but outclassed and made to look lenient and inauthentic by this brutal masterwork. Cristian Mungiu’s film is a nightmare of social-realist suspense, a jewel of what it is now considered the Romanian new wave, along with Cristi Puiu’s The Death of Mr Lazarescu and Corneliu Porumboiu’s 12:08 East of Bucharest. In more general terms, it is part of that emerging 21st-century phenomenon, ordeal cinema: a cinema that with great formal technique makes you live through a horrendous experience in what seems like real time. As a drama, it is superbly observed and telling in every subtle detail; yet it is also simply as exciting, in its stomach-turning way, as any thriller.

Anamaria Marinca and Laura Vasilu play Otilia and Gabriela, two students in their early 20s who share a tatty dorm in a provincial Romanian town. Otilia is relatively shrewd and worldly wise with a steady boyfriend; poor Gabriela, by contrast, is clueless, spacey, prone to getting things wrong. But this may be a function of her present situation: Gabriela is pregnant, and Otilia has selflessly volunteered to hold her friend’s hand through the illegal abortion she herself has procured. It will be Otilia’s job to borrow the cash, to arrange the hotel room, and to liaise with the abortionist himself, called Bebe (Vlad Ivanov). It is only when these two scared young women are alone with this man in the hideous hotel room that the real hell of their situation reveals itself. A sense of almost supernatural horror and squalor seeps into almost every scene around this event. There is a brilliantly filmed sequence in which Otilia meets Bebe for the first time; sanctimonious, pompous and self-pitying, he ceaselessly complains about the way in which Otilia and Gabriela have misunderstood the furtive arrangements, and then the camera remains with the deeply uncomfortable Otilia in his car, and stays with her in closeup while Bebe gets out in some grim wasteground to bully an old woman over whom he appears to have the powers of a landlord or accommodation manager. The scene continues until a loud and surreal eruption is heard. A backfire? A gunshot? Who can tell? But it lends the scene its bizarre, oppressive air of ill omen. 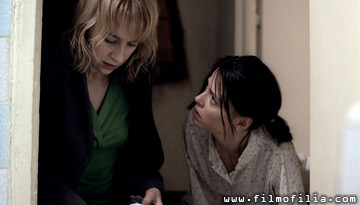 After the nightmare is over – for the present – Marinca’s face has on it the end of innocence. She is angry, with no way of expressing her anger. She has seen what humans can do, and what men can do to women, and she is left to wonder what protection she would have, were she to be in the same state. Would anyone step up for her, the way she stepped up for her friend? More to the point, will anyone step up for her, now that she has been defiled by such evil? What is her future now? Has its essential nullity been revealed to her by this violation as nothing else could? All these questions are eloquently asked by Marinca’s stricken face: it is an outstanding performance. Mungiu crowns the horror of his hotel scenes with a bravura sequence in which Otilia must swallow her revulsion and rage and go through with a long-arranged visit to her boyfriend’s parents’ flat. Her face shows that she has gone into almost clinical shock, and yet has to keep things together for a cringingly awful tea party with the old folk. Mungiu shoots this entire scene in virtually one static tableau, the jabbering, conceited family and neighbours crowded round the table, sounding off about the pampered young people. With exquisite sadism, Mungiu makes a couple of them medical men: one says cheerfully, at being pushed down the table: “Wait till you need help with your prostate: then you’ll see who’s important!” Everywhere, Otilia is surrounded by the patriarchy of the state, in the form of medical men resplendent in their seedy authority. Everyone, from the hotel waiter to the receptionist, to the abortionist and the party guests, has the same faintly tatty manner of smug resentment and accusation. The family party is cordial at first, but the shrill, browbeating note soon breaks through.

The 39-year-old Mungiu has created a masterpiece of intimate desperation with a succession of brilliantly created and controlled scenes; it fully deserved its Palme d’Or at last year’s Cannes film festival. On Marinca’s face is a spiritual devastation or incineration. It was from wretchedness and rage such as this that bred the uprising that changed Romania and the world.  ‘4 Months, 3 Weeks & 2 Days’Movie  Trailer: http://www.youtube.com/watch?v=xzitmvuOLKE
Continue Reading
Advertisement
You may also like...
Related Topics:Anamaria Marinca