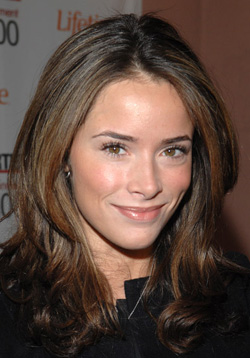 Abigail Spencer, lovely actress that we all remember from Mad Men movie has joined the cast of the upcoming Jon Favreau’s project titled Cowboys and Aliens.

And what a cast that is! Movie already stars Daniel Craig, Olivia Wilde, Sam Rockwell and Harrison Ford.

The story, based on the graphic novel by Scott Mitchell Rosenberg “starts in 1800s Arizona, where the local cowboys, headed by gunslinger Zeke Jackson, and the indigenous Apache tribe have been feuding fiercely for quite a while.

Their skirmish is interrupted, however, by the appearance of a spaceship, commanded by an alien creature that’s bent on enslaving the human race. It’s time for a six-gun shoot-out between these cattle rustlers and space invaders, and there might even be a temporary peace between the cowboys and Indians as they both take aim at these extraterrestrial uninvited guests. ”

Daniel Craig will play “a stranger with no memory of his past”, iron-fisted Colonel Dolarhyde will be Harrison Ford, while Olivia Wilde will portray “elusive traveler Ella.”

Sam Rockwell will play a bar owner named Doc who joins in the pursuit of the aliens. And now, Beach will play Nat Colorado, a half-Apache who works for Col. Woodrow Dolarhyde (played by Harrison Ford).

Abigail Spencer will be playing a prostitute named Alice that is also a former lover of Daniel Craig’s character and influences him to change his ways.