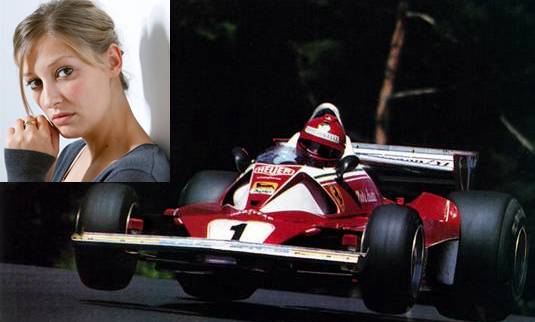 Hey guys, check out this piece of news — Downfall actress Alexandra Maria Lara will play the female lead in new Ron Howard film that tells the story of Niki Lauda’s near-fatal 1976 racing accident. Not bad at all, a Romanian-born German thesp will join Thor star Chris Hemsworth, who plays McLaren driver James Hunt and Daniel Bruhl (Inglourious Basterds) who portrays Ferrari racer Niki Lauda, three-time Formula One champion. For those unfamiliar with the Formula One Hunt was a well-publicized playboy who also took the lead in the 1976 F1 racing season after Lauda is involved in a life-threatening car crash in only the second lap of the German Grand Prix. F1 legend, who very nearly burned to death returns a few weeks later, still nursing burn wounds, to defend his championship from Hunt at the Japanese GP. The script is written by Peter Morgan. Howard, exited about the script, revealed:

Peter Morgan, who did the script for Frost/Nixon, has known Niki Lauda for quite some time and started digging for information about 1976, when Niki had his accident and then literally rose again like a phoenix to fight James Hunt for the title. Peter has written a mesmerizing script – not only for Formula1 fans, but also for everybody hooked on sports and drawn to extraordinary characters.”

Howard added that it’s going to be a motion picture in the mould of Apollo 13, Frost/Nixon and A Beautiful Mind. Lara recently played journalist Annik Honoré, Sam Riley’s mistress in the Ian Curtis biopic Control. Additionally, Francis Ford Coppola gave her a leading role in Youth Without Youth More recently, she appeared in The Baader Meinhof Complex, Spike Lee’s Miracle at St. Anna as well as in Stephen Daldry’s The Reader. Check her out in the Downfall (Der Untergang ) trailer with amazing Bruno Ganz as Hitler. [youtube]http://www.youtube.com/watch?v=uFG9a1NgfZA[/youtube]