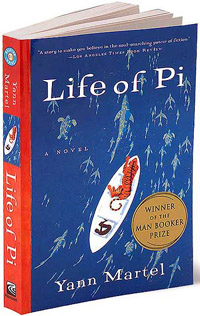 Yeah, we already had a little chat about Ang Lee‘s plans for adaptation of Booker Prize winning novel Life of Pi, so you probably remember that we also mentioned it’s going to be filmed in 3D, right? Well, now, guess what? Something went wrong and it looks that guys from Fox think Lee’s vision for “Pi” is a little expensive for their tastes (remember the budget was reportedly estimated at $70 million). Story goes like this: “The precocious son of a zookeeper, 16-year-old Pi Patel is raised in Pondicherry, India, where he tries on various faiths for size, attracting “religions the way a dog attracts fleas.” Planning a move to Canada, his father packs up the family and their menagerie and they hitch a ride on an enormous freighter. After a harrowing shipwreck, Pi finds himself adrift in the Pacific Ocean, trapped on a 26-foot lifeboat with a wounded zebra, a spotted hyena, a seasick orangutan, and a 450-pound Bengal tiger named Richard Parker (”His head was the size and color of the lifebuoy, with teeth”). It sounds like a colorful setup, but these wild beasts don’t burst into song as if co-starring in an anthropomorphized Disney feature. After much gore and infighting, Pi and Richard Parker remain the boat’s sole passengers, drifting for 227 days through shark-infested waters while fighting hunger, the elements, and an overactive imagination. In rich, hallucinatory passages, Pi recounts the harrowing journey as the days blur together, elegantly cataloging the endless passage of time and his struggles to survive: “It is pointless to say that this or that night was the worst of my life. I have so many bad nights to choose from that I’ve made none the champion.” Let us remind you that Lee wanted this to be a 3D magical fantasy adventure crammed with visual effect because there will be a lot of CG animals (whales, fish, meercats) plus ocean and atmosphere. Scribe David Magee (from Finding Neverland) was in charge for the screenplay, so at one moment, everything looked just perfect. So, does this mean that Lee’s plans will end up like plans of Jean-Pierre Jeunet, M. Night Shyamalan and Alfonso Cuaron, who all stalled out while trying to make it? We have no idea! The only thing we know is that project remains active, thanks to the devotion of Fox 2000 chief Elizabeth Gabler, who has been hugely keen on Life of Pi film. We’ll keep an eye on this story, make sure you stay tuned!
Continue Reading
Advertisement
You may also like...
Related Topics:Ang Lee, Life of Pi