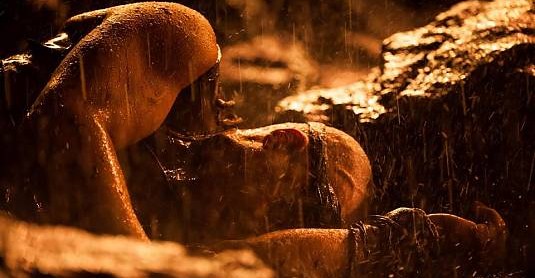 We’re sick and tired of all these Riddick images, we want to see the first trailer, clip, action… something else for God’s sake! But no, Vin Diesel just loves to share photos (he has a lot of fans on Facebook, can you blame him?), so here we go – another new image from the whole thing has arrived, go ahead and check out the larger version! Written and directed by David Twohy, the movie once again centers on Diesel as a dangerous, escaped convict wanted by every bounty hunter in the known galaxy. Only, this time – he’s betrayed by his own kind and left for dead on a desolate planet, so quite logically – he must fight for survival against alien predators. But don’t worry – he’ll be fine! As a matter of fact – in this new movie he becomes more powerful and dangerous than ever before. Revenge is all he wants before returning to his home planet of Furya to save it from destruction. Beside Vin Diesel, Riddick also stars Karl Urban, Jordi Molla, Matt Nable, Katee Sackhoff, Bokeem Woodbine, Dave Bautista, Conrad Pla, Raoul Trujillo, Nolan Funk and Keri Hilson, and as you already know – it is set to hit theaters on September 6th, 2013. Click for a better look & stay tuned for more!