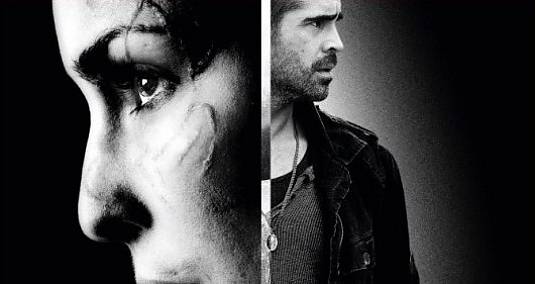 Stylish… well I think it’s stylish, but in case you don’t like it – then you can also call it another international poster. Who cares! The most important thing is that Niels Arden Oplev‘s new action thriller opens in less than ten days, and we’re here to take another look at the leading duo, great Noomi Rapace and Colin Farrell! Check them out in the rest of this report, and let us know what you think! So, as you already know, this movie marks the American theatrical debut of director Niels Arden Oplev, who helmed the original The Girl with the Dragon Tattoo film. Oplev directed this pretty intense story from J.H. Wyman‘s script which centers on two strangers whose mutual desire for revenge draws them together and triggers an escalating trail of mayhem. You already had a chance to check out the trailer, some pretty cool clips and images from the whole thing, so I’m sure you also know that the rest of the cast includes Dominic Cooper, Terrence Howard and Isabelle Huppert. Click on the poster to take a bit better look, and don’t forget – Dead Man Down opens on March 8th, 2013!