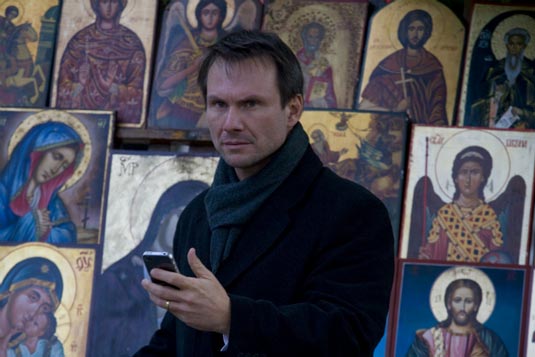 Christian Slater has been trying to find a foothold in the show-biz again, as the last few years have seen the once-popular leading man trying (but ultimately failing) to launch comebacks on both the big and small screens. In this one, Slater plays Robert Diggs, a black ops agent who comes to work for Ambassador Ashdown (Donald Sutherland), tracking down a vigilante assassin in Eastern Europe. The maverick hit(wo)man has been taking out high-profile targets on the U.S. hit list, and Diggs must uncover the killer’s identity before there’s an international incident. The usual game of cat and mouse ensues. The film was directed by Isaac Florentine, who has had a directorial hand in just about every incarnation of the Mighty Morphin Power Rangers (yuck!) between the mid-90s and early 2000s. His feature film credits include Undisputed II and Undisputed III which were B-movie martial arts action flicks that also managed to attract some famous names (Scott Adkins, Michael Jai White, etc.). So, in other words, the guy has fun directing martial arts-style action B-films. This latest entry certainly fits in that lane, judging by the camerawork and cinematography.

Star Elika Portnoy (Immigration Tango) also co-wrote the script for the movie, and co-stars include Timothy Spall (Wormtail from Harry Potter) as well as a collection of Eastern European and Middle Eastern actors (and here I thought the topic of ‘bad Serbs/Russians/Eastern-Europeans’ was exausted already. What? Have you seen all those icons? Wait and you’ll see, there’s gotta be at least one Serb there, mark my words!). Well, Assassin’s Bullet isn’t likely to be the film that resurrects Christian Slater as a headlining actor, but it should be a bit of fun for ardent fans of the B-film espionage/thriller sub-genre (I’ll pass on that, thank you). It will hit the theaters on August 3rd, 2012. Take a look at the trailer and see for yourself: [youtube]http://youtu.be/hAATiO0zxps[/youtube]
Continue Reading
Advertisement
You may also like...
Related Topics:Christian Slater, Donald Sutherland, Harry Potter, Michael Jai White, Scott Adkins, Timothy Spall