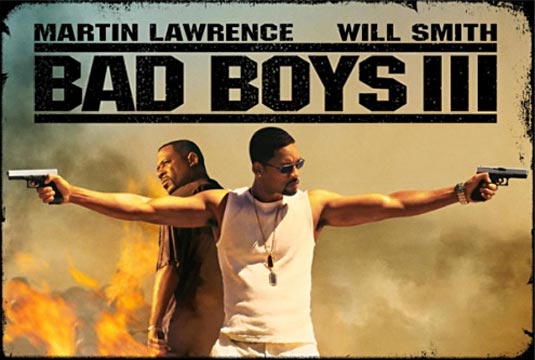 Columbia Pictures is currently working on “Bad Boys 3.” Peter Craig is already working on a screenplay and third installment in the “Bad Boys” franchise will be Craig’s first major Hollywood screenplay. According to THR, the studio is hoping that director Michael Bay, producer Jerry Bruckheimer and stars Will Smith and Martin Lawrence will all return for the third film. None of the four has signed a deal, but all parties have uttered their willingness to return if the people behind the project can come up with a story. However, with the popularity of Smith, Lawrence, Bay and Bruckheimer, it could be costly to get everyone on board. The first Bad Boys movie was released in 1995, detectives Mike Lowrey (Smith) and Marcus Burnett (Lawrence) protect a murder witness (Téa Leoni) while investigating a case of stolen heroin. The film exceeded all expectations making $141 million worldwide. In the sequel (2003) they investigate the flow of Ecstacy into Florida. The films also starred Joe Pantoliano. With the help of Smith’s action star status and Bay as a huge director, the 2003. sequel grossed $138 million domestically and $273 million worldwide. Let us know what you think in the comments…
Continue Reading
Advertisement
You may also like...
Related Topics:Bad Boys 3, Jerry Bruckheimer, Joe Pantoliano, Martin Lawrence, michael bay, Will Smith