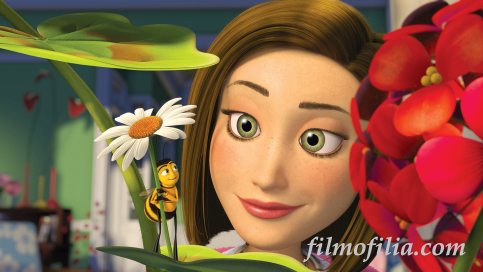 Jerry Seinfeld, Renee Zellweger, Matthew Broderick, Patrick Warburton, John Goodman, Chris Rock, Kathy Bates, Barry Levinson, Larry King, Ray Liotta, Oprah Winfrey… There’s been a lot of buzz about Jerry Seinfeld’s new film over the past couple of years – being a CGI project, it’s taken that long to make it – and though the wait may have stung a few, the result definitely won’t. By now, we’d all be aware that Jerry Seinfeld – whether it’s as a stand-up comedian or as the brainchild of one of TV land’s best sitcoms of all time – never enters anything half-prepped, and the work that he’s put into his first movie shows right up there on the screen – it’s a beautiful, dazzling family pic that doesn’t skip a beat. In short, this is no – excuse the pun – B-movie. Written by and featuring Seinfeld as a very personable bee, ’Bee Movie’ is uncompromising fun and well-crafted filmmaking, and unlike a lot of the mediocre animated/family films in recent months it’s a satisfying experience for any age. http://www.youtube.com/v/16SMpTXpuuY ’Toy Story’ and ’Shrek’ were such successes because they made sure to include a little bit of everything in the pot, and as a consequence, kids, their parents and their grandparents (alive or deceased – Woody and Buzz reanimated many a corpse with their hijinks) were able to head along to the films’ as a family, and all walk away with smiles streaming from their mouth pieces. “Bee Movie” works the same way – it is a film that no doubt had just as many joke writers on staff as the producers have dollar signs in their eyes, because there’s a gag or three in here for each target market. Our hero is recent college graduate, Barry the bee, a buzzer who wants more out of life than slaving away day-in day-out at the honey factory. When the opportunity presents itself to Barry to venture out into the world, he jumps at it. In New York City, he finds sweets, TiVo, flowers and most predominantly, the friendship of a human (Renee Zellweger). Through his new friend, Barry discovers that anyone can buy honey right off the grocery store shelf (Ray Liotta’s brand is a top seller), he is shocked that people are stealing the bees’ unique creation and making money from it. Outraged, he decides to avenge this injustice by suing the human race.
Continue Reading
Advertisement
You may also like...
Related Topics:Oprah Winfrey, Ray Liotta, Renée Zellweger

‘There Will be Blood’
‘Zodiac’ Review
Advertisement