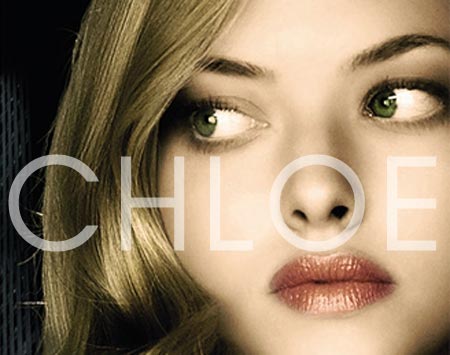 Earlier we posted the trailer for “Chloe” drama thriller and now we have a brand new poster. Atom Egoyan‘s remake of the French thriller “Nathalie centers on Catherine (Julianne Moore), a Toronto-based gynecologist whose husband, David, (Liam Neeson) spends so much time away from home that she begins to suspect he’s sleeping around. On a whim, she hires nubile hooker Chloe (Amanda Seyfried) to seduce David and test his fidelity. Although this recalls the basic premise of Mike Judge’s “Extract,” the tone in “Chloe” aims less for outright humor than a dark progression of uneasy tones. Touted as a change of pace for Egoyan, it plays more like a weird pulp version of his other movies. As the titular character obsesses over Catherine’s life, setting her eyes beyond David and onto the couple’s rebellious teenage son, Michael (Max Thierot), the movie veers into film noir when its main heroine takes on a femme fatale mystique. “Chloe” is scheduled to be released on March 19, 2010. [source: Empire]