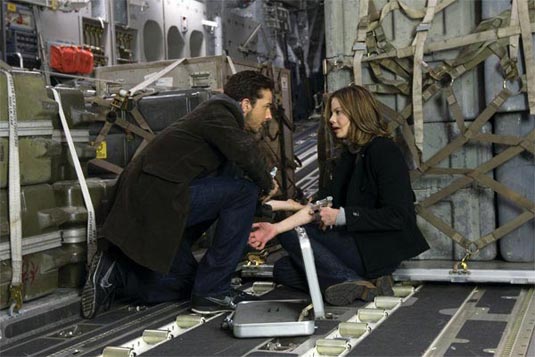 New photos from D.J Caruso‘s “Eagle Eye” starring Shia LaBeouf, Michelle Monaghan, Rosario Dawson, Billy Bob Thornton and Michael Chiklis have hit the net. Shia LaBeouf reteams with Disturbia director D.J. Caruso as a young slacker whose overachieving twin brother has died mysteriously. When the young man returns home, both he and a single mother find they have been framed as terrorists. Forced to become members of a cell that has plans to carry out a political assassination, they must work together to extricate themselves. Two unsuspecting Americans are separately drawn into a conspiracy by a mysterious woman they have never met, but who seems to know their every move. By the time they discover her frightening identity, they have become her unwitting accomplices in a diabolical assassination plot. “Eagle Eye” will hit theaters on September 26th 2008. [Via beyondhollywood.com]
Continue Reading
Advertisement
You may also like...
Related Topics:billy bob thornton, D.J.-Caruso, Eagle Eye, Michael Chiklis, Michelle Monaghan, Shia LaBeouf