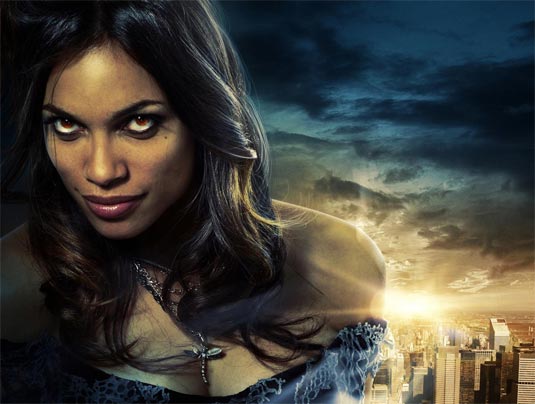 20th Century Fox has provided us with the new promo posters for “Percy Jackson & The Olympians: The Lightning Thief” The film is based on the first novel in Rick Riordan’s “Percy Jackson & the Olympians” series. Trouble-prone teen Percy Jackson is about to be kicked out school – but that’s the least of his problems. The gods of Mount Olympus and assorted monsters seem to have walked out of the pages of Percy’s Greek mythology texts and into his life – and they’re not happy. Zeus’ lightning bolt has been stolen, and Percy is the prime suspect. Now, Percy and his friends must embark on a cross-country adventure to catch the true thief, save Percy’s family, and unravel a mystery more powerful than the gods themselves. The fantasy-adventure stars Logan Lerman, Brandon T. Jackson, Alexandra Daddario, Sean Bean, Pierce Brosnan, Steve Coogan, Rosario Dawson, Catherine Keener, Kevin McKidd, Joe Pantoliano, Uma Thurman and Ray Winstone. “Percy Jackson and the Olympians: The Lightning Thief” is directed by Chris Columbus (Home Alone, Harry Potter and the Sorcerer’s Stone, Harry Potter and the Chamber of Secrets) and will be released to theaters on February 12, 2010.