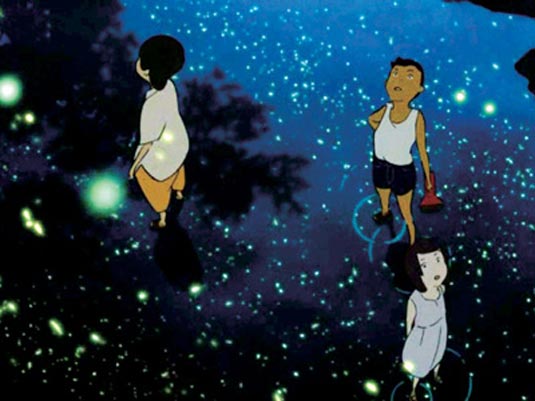 The 2012 Waterloo Festival of Animated Cinema added another anime film to its schedule lineup. The festival will show Kônosuke Uda‘s Rainbow Fireflies (Niji-Iro Hotaru – Eien no Natsu Yasumi) feature along with the previously announced Asura, Blood-C: The Last Dark, A Letter to Momo, Wolf Children films and the Anime Mirai shorts. Based on Masayuki Kawaguchi‘s 2007 novel, Rainbow Fireflies follows a sixth-grade boy named Yūta, voiced by Akashi Takei, on his summer vacation. His father passed away one year ago in a traffic accident, and Yūta now goes alone to visit a place where he and his father once shared memories. The two had gone often to an unused dam deep in the mountains to collect the rhinoceros beetles nearby. Yūta suddenly receives a shock in a thunderstorm, loses his footing, and gets knocked out. When he wakes up, he see a small girl and a village – except this village is the one that should be submerged below the dam. Yūta realizes that he slipped back time to over thirty years ago, before the dam was completed. Another summer vacation, and another chance for Yūta to reclaim what cannot be reclaimed, begins. The film opened in Japan on May 19th, 2012 and screened at France’s Annecy film festival in June. The festival is also streaming a trailer for the film: The festival will run from November 15th to November 18th at the Chrysalids Theatre in Kitchener, Ontario, Canada.
Continue Reading
Advertisement
You may also like...
Related Topics:Blood-C: The Last Dark