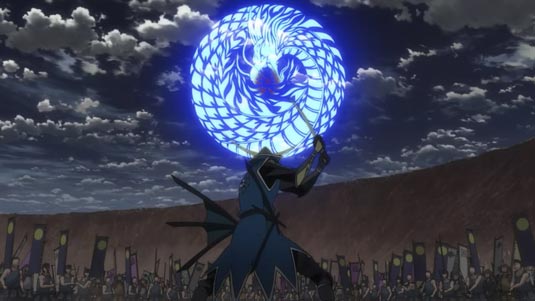 North American anime distributor Funimation has streamed the entire Sengoku Basara: The Last Party film with its English dub on Friday, and the stream was, unfortunately, available for this weekend only. The stream promotes Funimation’s Blu-ray/DVD combo release of the 2011 film on November 6th, 2012 – which is on Tuesday – so you won’t have to wait too long to see it, in case you’ve missed the streaming. The feature film was announced in 2010 after the final Sengoku Basara: Samurai Kings 2 television episode, and it opened in Japan in June of 2011. Sengoku Basara: The Last Party continues the story after the fall of Toyotomi Hideyoshi, as Japan plunges into chaos and subordinate Ishida Mitsunari looks to seek revenge against Date Masamune and features the voices of Sôichiro Hoshi, Kazuya Nakai and Tôru Ôkawa. Funimation has previously released both Sengoku Basara television series in North America. If you’re a fan of the feudal Japan, you’re gonna love it! In case you don’t know what I’m talking about, here’s the trailer – it might make you want to see it:
Continue Reading
Advertisement
You may also like...
Related Topics:Kazuya Nakai