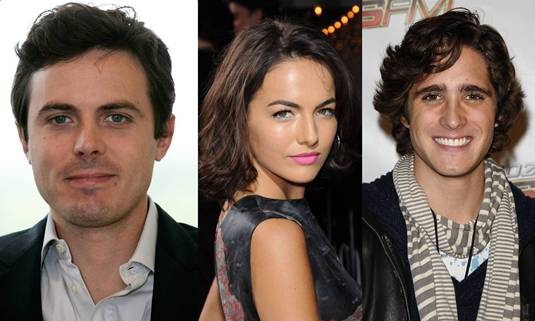 The Alex Proyas‘s 3D adaptation of John Milton’s epic poem ‘Paradise Lost’ seems to be rounding out the main cast in a fast way. A big-budgeted heavenly epic already stars Bradley Cooper and Ben Walker as warring archangels Lucifer and Michael. For those of you who haven’t heard yet, three more thespians have joined the film’s cast as Gabriel, Adam and Eve. Casey Affleck, Diego González Boneta and Camilla Belle are actually still in negotiations – Affleck and Belle have been officially offered roles and that Boneta is the ‘front-runner’ for the first man. I almost forgot to mention that Djimon Hounsou is on board as Abdiel (Azrael), the angel of death. Since the film requires special effects, involving large moving objects, it takes twenty weeks during the pre-production phase, and then eight weeks of actual photography slated to begin in January in Sydney, and finally 72 weeks of post-production process, meaning we probably won’t get to see the film until 2013 at the earliest. Belle first came to attention playing Daniel Day-Lewis’ daughter in The Ballad of Jack and Rose and has had a breakout with starring roles in 10,000 BC and Push, back in 2009. While the Paradise Lost main theme can be described as a conflict arising between Lucifer and Michael, Eve will apparently play a huge role in the battles that break out between the contesting angels and their respective divisions, despite the fact that Adam and Eve had an ideal marriage. As for young Boneta he recently grabbed the highly coveted lead role of Drew in Adam Shankman’s movie adaptation of the Broadway musical ‘Rock of Ages.’ So, Adam could sing the psalms. And after playing a diversity of dubious moral characters, the role of Gabriel, an angel with six wings and God’s primary messenger, will definitely change of pace for Casey Affleck. He also released his major directorial debut last year, I’m Still Here, a mockumentary about the musical career of his brother-in-law Joaquin Phoenix and will next appear in Brett Ratner’s Tower Heist. So, check him out in the trailer below: [youtube]http://www.youtube.com/watch?v=Z4KXF7NWFRE[/youtube]

Cancel reply
Sony Brings Its Classic Film GHOSTBUSTERS Back to Theatres
Blake Lively in PRIDE AND PREJUDICE AND ZOMBIES?
Advertisement