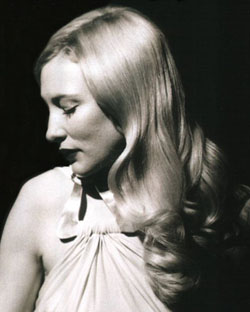 Mark Strong revealed that Ridley Scott‘s “Nottingham” will finally begin filming this Spring. He then confirmed that Sienna Miller will no longer play Maid Marian, but refused to reveal her replacement. “I’ve heard rumors but I can’t tell you. I’ll get in trouble,” he said. Now, “Nottingham” appears close to getting back on track with the news that Cate Blanchett is in talks to play Maid Marian opposite Russell Crowe as Robin Hood. “I think Cate Blanchett is set to take the Maid Marian part. She is a wonderful actress and it would make it a much classier film if she was in it,” Strong, who will play Guy of Gisbourne in the Robin Hood tale told The Telegraph. “We’ve been waiting all last year but it’s pretty much ready to go at the end of March beginning of April,” he said. According to rumors, filming was further delayed to allow star Russell Crowe to lose enough weight. Strong added that the script has also changed since its beginning. “There was an identity swap between the Sheriff of Nottingham and Robin. This has slightly changed now,” he explained. “There is a case of mistaken identity but it’s more (about) Russell’s Robin, than the Sheriff.”
Continue Reading
Advertisement
You may also like...
Related Topics:Cate Blanchett, Mark Strong, Nottingham, Ridley Scott, Robin Hood, Russell Crowe