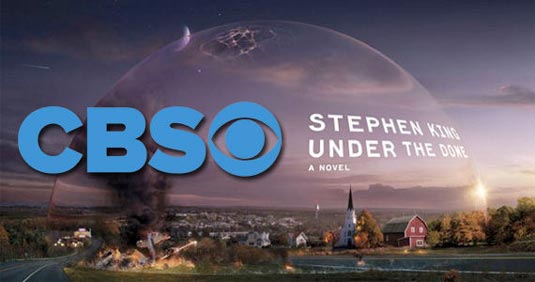 CBS unveiled the first footage of its summer hit-in-making, Under the Dome, as a closing of WonderCon on Saturday. The short reel – which offered footage mixed with interviews with the drama’s cast and creators, including Stephen King and Brian K. Vaughan – featured the first look at the mysterious dome, and reactions of Chester’s Mill residents to the crashing planes, flying body parts, separated couples and more. The summer series, which premieres on June 24th, 2013 on CBS, follows residents of Chester’s Mill as they deal with the postapocalyptic conditions that ensue when a force-field dome mysteriously encapsulates the town (I’m intensely curious as to who got to that idea in the book/series, that is, whose mind came up with an idea to engulph a town with such dome? A wizard? An alien? Corrupted government employee who felt like they deserved a revenge? Is the dome a protecting field – who knows what’s outside of it! – or a punishment?). Producers – including Neal Baer and Jack Bender – said Dome will be “cinematic” and as “big as possible”, yet intimate and “character alive” as it can be. Based on King’s thick book – its story spreads over more than 1,000 pages (but that’s not a big effort for King, as far as we know) – showrunner Baer said the 13-episode drama is split into three parts: faith (“This can’t be real,” “This won’t last for too long”), fear (“Oh my God, what are we going to do”) and fascism (“Who’s going to maintain order when people run out of things”). Baer also noted Dome will explore the intense circumstances that present people with difficult choices in impossible situations. “When you’re under those intense circumstances, people’s good or evil hearts may come out more than in everyday life,” he said. “That intensity under that magnifying glass gives us the opportunity to explore what people would really do. It’s a parable for our times: can the sun shine through the dome? Can it rain? Those sound like climate issues and we can really explore that without being preachy,” he said. “It’s fun for us to think about what happens when you run out of Tide soap, what do you use? Who rises? Do you really need a banker under the dome? But farmers? Maybe you do.” Vaughan added regarding the similarities to the book: “Big Jim (played by Breaking Bad’s Dean Norris) is pretty effing evil and we we’re going to get you there. We’ve told [the cast] to be careful what you read. We’ll get you there, but it might take some time.” Stay tuned for the first-look video on Monday, and for full report visit THR.