We have added the new trailer and poster for Fox Searchlight’s upcoming Miguel Arteta (Youth in Revolt, The Good Girl) directed comedy Cedar Rapids. Ed Helms stars in the film which also includes the acting talents of John C. Reilly, Anne Heche, Sigourney Weaver, Stephen Root, Alia Shawkat, Mike O’Malley, Rob Corddry, and Seth Morris. Hit the jump to read film’s synopsis, watch the trailer and check out the poster Synopsis: Tim Lippe (Helms) was the guy people always thought would go places but then he just … didn’t. He’s been living in über-sleepy Brown Valley, Wisconsin his whole life, still “pre-engaged” to his 7th grade teacher Millie Vanderhei (Weaver), while selling insurance to protect other people’s dreams. But now, Tim’s stalled life is about to get a kick-start because, for the first time in his 34 years, he’s headed to a “major” metropolis – Cedar Rapids, Iowa – where he must try to save his company at a do-or-die insurance convention that, for him, will be entirely nonconventional. From the minute he checks into his hotel with his ancient American Tourister and cummerbund money-belt, it’s clear Tim has no idea how the modern world really works. He is soon smitten with seductive Nebraskan insurance agent Joan (Heche) and awed by his experienced roommates, the straight-shooting Wilkes (Whitlock Jr.) and the suspicious Zeigler (Reilly).Disheartened when he comes face-to-face with corporate corruption, Tim is ultimately lured beyond the lobby into an urban jungle he’s only ever seen on DVD and when it seems his life – and chances to succeed – have gone completely topsy-turvy, he finds his own unjaded way to turn it all around. Cedar Rapids has a limited release in the US on February 11th, 2011.  Let us know what you think in the comments… 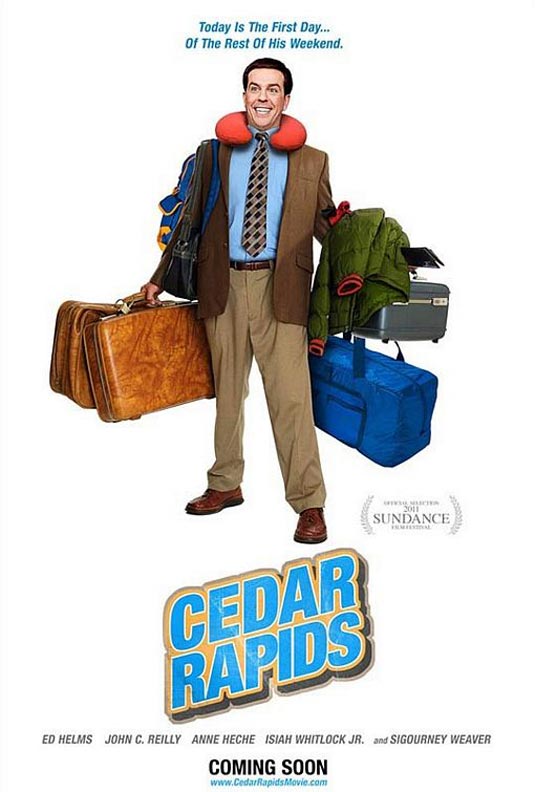