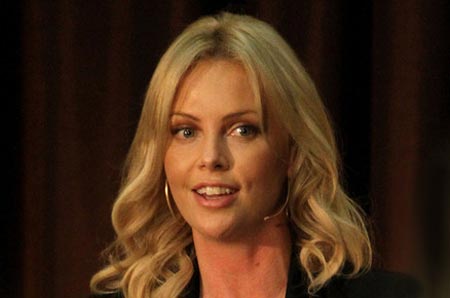 Lovely Charlize Theron has joined the cast of an upcoming Ridley Scott‘s sci-fi action movie titled Prometheus. Theron joins already announced Noomi Rapace and Michael Fassbender in a movie that was originally developed as an Alien prequel. But now, it looks that we’re talking about a totally different film, check out the rest of the report to find out more details. So, we all know that Alien was penned by Jon Spaihts. On the other hand, the upcoming Prometheus is being written by Scott and Damon Lindelof. However, one thing is for sure, both movies are based on Ridley Scott ideas. As, usual, plot details are secret at the moment, but according to Michael Fassbender, who will star as an android, Prometheus is still “absolutely” connected to the Alien film series. Here’s what Fassbender had to say about the project in an interview with MTV: “Oh, absolutely. There’s a definite connecting vein. You realize you’re part of something else, but it’s definitely in keeping with the old ones. When I read it, I was like, ‘Well, okay, another Alien. Where do you go with this idea?’ And then I sort of read the script, and it’s new, yet it’s in keeping with the old traditions as well. But there’s a whole new revelation within this film. The first ‘Alien’ were thrillers. Something’s going on. It’s creeping, it’s sinister. Things are happening, it’s building, different sorts of intrigues and politics going on between the different relationships on board. There’s action in it, but the intelligence is what struck me when I read it. It’s more sort of like the original ones. There are things happening and building, and the intelligence of the first two-thirds of the film gets you ready for the action.” Shooting is set to begin this spring, and Prometheus will be released on June 8th, 2012. Two other major male roles have yet to be cast, so, as usual, we’ll keep an eye on the whole thing. Make sure you stay tuned!