Connect with us
Like every movie presented at Cannes Film Festival until now, ”Che” (‘The Argentine‘ and ‘Guerilla‘, two-part biopic with a total running time of 268 minutes) has mixed reviews. Some critics has ‘problem’ that ‘Che’ is uncommercial. They, apparently, are not conscious where they actually are – at Cannes Film Festival! I haven’t seen the movie and I can’t talk about ‘Che’ but I certainly don’t care if it is commercial or not. But one I can say, I’m sure that Benicio Del Toro is fantastic. 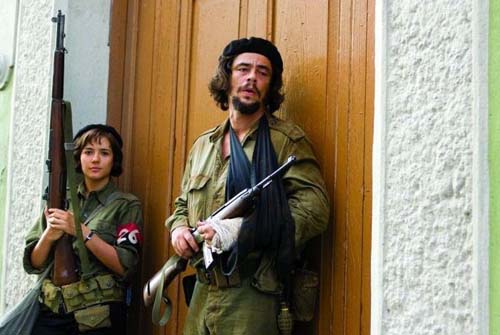 So, you can see the clip #1 from Steven Soderbergh‘s ‘Che’ and read some reviews from notable sites. Each of the two films will focus on a different episode in Che’s life: The Argentine dramatises the struggle of Che and Fidel Castro to topple Cuba’s Batista regime in 1956, and The Guerrilla will chart the episode when, eight years later, Che travelled to New York to address the United Nations. ”The two parts are radically different in subject matter and, a bit less so, in form. It’s clear that the overriding structural idea is that of a mirror image: Part 1, much more humorous, centers on the victory over Cuban dictator Fulgencio Batista and is all up, up, up, while Part 2 is about Guevara’s participation in the failed uprising in Bolivia and is all down, down, down. In Cuba, Fidel and Che are loved by the peasantry and become god-like figures; in Bolivia, Che, forced to use an assumed name, is frustratingly unable to rally the people to his side and is hunted like an animal by the Bolivian army. In the most powerful segment of the entire film, he is finally murdered after being betrayed by one of his beloved campesinos. ” – Hollywood Reporter ”Del Toro may have been the only possible choice for the part, but even so it’s impressive to note how much he brings to the role; a rueful humanity, real charisma, true excitement, flashes of humor. And while the supporting cast’s efforts are hampered by the minimal screen time offered them, there are standout moments from the other actors as well. Demian Bechir gives us not only the manic messianic charm of Fidel Castro’s early years but also the plush corruption that came his transformation from liberator to dictator. Plenty of people are going to be talking about Steven Soderbergh’s Che Guevara biographical films — The Argentine and Guerrilla, screened at Cannes tonight as one presentation simply called Che — over the next few months. There will be arguments about the politics of the films; there will be discussions of whether or not the films have any emotional center; there will be questions of if, when the film gets some kind of U.S. distribution deal, exactly how they should be released — two films released staggered throughout the last half of the year or cut down to one three-hour film or shown as a long, big double bill that presents the separate films back-to-back. There will be talk of if Benicio Del Toro deserves a Best Actor nomination for his work as Guevara, or if Soderbergh’s portrait of Che is too flat to engage us; I can easily imagine discussions of the look and feel of the film, shot in high-resolution digital with all the craft and care Soderbergh usually brings to shooting on film. I can’t predict how all of these questions and possibilities will play out, but I can say — and will say — what a rare pleasure it is to have a film (or films) that, in our box-office obsessed, event-movie, Oscar-craving age, is actually worth talking about on so many levels.” – Cinematical “In the 20 years since he won the Palme D’Or for sex, lies and videotape, Steven Soderbergh has travelled along some unexpected paths from the demented experimentation of Schizopolis and the sterile 1940s homage of The Good German to several helpings of Danny Ocean and his merry men to top up his commercial credibility. It is hard to imagine another American director of his generation with the clout or all-round ability to pull off a two-film, five-hour portrait of revolutionary icon Ernesto Che Guevara. His measured approach eschews grand, crowd-pleasing gestures or any temptation to adopt the sweep of a David Lean-style epic. Instead, he has created an absorbing, thoughtful marathon in which the focus is firmly on the personalities and the political arguments that forged the revolutionary ideals of the 1950s and 1960s…. This is very much a film of ideas.” – Screen Daily
Continue Reading
Advertisement
You may also like...
Related Topics: