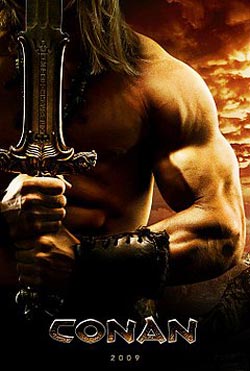 Dirk Blackman and Howard McCain have been hired to redraft the script for Lionsgate’s barbarian epic Conan, the updated remake of sorts of 1982’s Conan The Barbarian. The movie is a potential resurrection of the classic warrior created by Robert E. Howard, who has appeared in dozens of pulp stories published in the 1930s. In 1982, Oliver Stone and John Milius wrote a bloody adaptation, which Milius also directed, that starred Arnold Schwarzenegger. After finishing a script titled Amazon about female warriors with Scarlett Johansson attached, the two were brought on to work on a Conan script separate from the original two writers Thomas Dean Donnelly and Joshua Oppenheimer. Now Lionsgate is anxious to get this into production right away and are trying to launch a franchise by making it a $100 million R-rated origin film. “We all want this movie to go into production as soon as possible. It’s a fast-tracked movie.” Fredrik Malmberg, Boaz Davidson, Joe Gatta and Avi Lerner will produce the film. Malmberg told The Hollywood Reporter:

“We all want this movie to go into production as soon as possible. It’s a fast-tracked movie. Lionsgate felt the process was enhanced by having a second team come in and do a script.”

“Fans expect (these types of movies) to be more true to the source material.  There’s no reason there couldn’t be a Conan movie every two years. He’s almost like Batman: He’s a dark hero. He’s a hard hero. He has to be badass, but we also have to like him.”