“After a while I realized that I was getting further and further away from what my original intentions had been. So at this age I decided, ‘Well, why don’t I make the kinds of films I wanted to do when I was 18? I’ll just do it later in life.'”

The 68-year-old Francis Ford Coppola explains in an interview with The Associated Press. The five-time Oscar winner, best known for “The Godfather” trilogy about the Corleone mafia family, is preparing to shoot a film about a much different, but equally dysfunctional, Italian-immigrant clan. “Tetro,” for which Coppola wrote an original screenplay, follows two sons of a great but monstrously self-absorbed orchestra conductor in contemporary Argentina. Much of the film will be shot in La Boca (Argentina), a neighborhood marked by the legacy of poor Italian immigrants who arrived by the shiploads in the early 20th century. 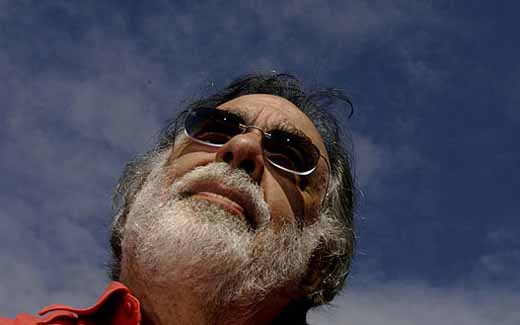 Researching his tale, Coppola discovered many parallels between Buenos Aires and the New York he grew up in. “Italian families emigrated to Argentina and the United States, and very often brothers in the same family would go two different directions,” Coppola explains, relaxing in the courtyard of his new home and studio, which comes complete with the steel barbecue grill no self-respecting Argentine would do without. “Buenos Aires is a big city like New York; it’s full of life and it gave me a chance to put these characters in a slightly exotic setting where I would be free to work and pursue this more personal type of filmmaking.” Vincent Gallo of “Buffalo 66” and “The Brown Bunny” is the lead character in “Tetro,” backed by Spanish actress Maribel Verdu of “Pan’s Labyrinth” and Oscar winner Javier Bardem of “No Country For Old Men.” Newcomer Alden Ehrenreich, 18, will play a young man searching for the estranged older brother Tetro, a “tragic poet figure” who broke all family ties and moved in amid the Bohemian theater, dance and artistic community of Buenos Aires. Gallo will play the title character, a brother in a family torn apart by rivalries and betrayal, Bardem plays an Argentinean literary critic in film. Coppola has made fortunes on gambles like “Apocalypse Now,” and lost them on commercial flops like “One from the Heart.” Now he says he can finance his own movies, like “Tetro,” for under $15 million. With his 2007 film “Youth Without Youth,” Coppola returned to directing after a hiatus of several years. He calls “Tetro” the “second film of my new career, so I’m just learning.”

“I’m not really trying to make a lot of money off the movie business, I want personally for people to say, ‘God, that was beautiful!‘”