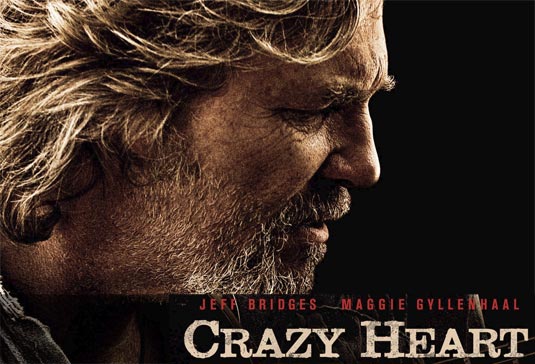 Fox Searchlight has released the poster and photos for “Crazy Heart,” the redemptive country/western music drama. Four-time Academy Award nominee Jeff Bridges stars as the richly comic, semi-tragic romantic anti-hero Bad Blake in the debut feature film “Crazy Heart” from writer-director Scott Cooper. Bad Blake is a broken-down, hard-living country music singer who’s had way too many marriages, far too many years on the road and one too many drinks way too many times. And yet, Bad can’t help but reach for salvation with the help of Jean (Maggie Gyllenhaal), a journalist who discovers the real man behind the musician. As he struggles down the road of redemption, Bad learns the hard way just how tough life can be on one man’s crazy heart. Adapted from a book written by Thomas Cobb, the film also stars Robert Duvall and Colin Farrell. Original music is by T. Bone Burnett. Fox Searchlight is giving “Crazy Heart” a limited release in select cities on December 16 so the movie will qualify for the Oscars in February 2010.