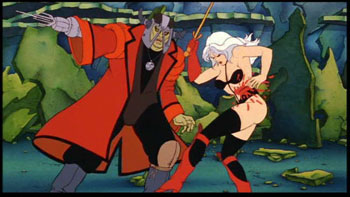 Paramount Pictures will make a new animated film based on the ’70s sci-fi fantasy magazine Heavy Metal, reports Variety. Director David Fincher is spearheading the project inspired by the magazine which spawned the original 1981 animated film and the 2000 sequel. Fincher will direct one of the segments; Kevin Eastman, the “Teenage Mutant Ninja Turtles” co-creator who is now owner and publisher of Heavy Metal, will direct another. Tim Miller, whose Blur Studios will handle the animation, is also directing a segment for what is being conceived as an R-rated, adult-themed feature. The studio will lock in the other directors shortly. Fincher, Eastman and Miller will produce.Heavy Metal will be stamped by the erotic and violent storylines and images that remain the trademark of a magazine that debuted in the U.S. in 1977. The magazine introduced the works of American artists and writers such as Robert Silverberg, Harlan Ellison and H.R. Giger. The film will consist of eight or nine individual animated segments, each of which will be directed by a different director.
Continue Reading
Advertisement
You may also like...
Related Topics: