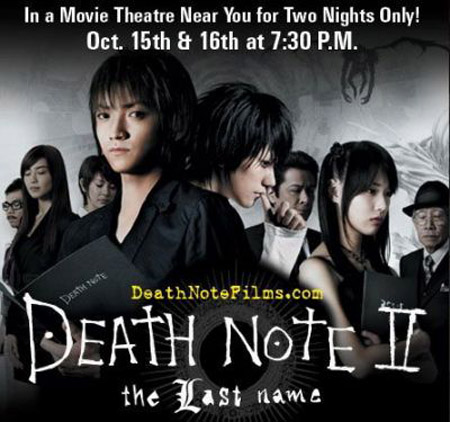 NCM Fathom and Viz Pictures present a special two-night, multi-city event – “Death Note II: The Last Name” at nearly 400 theatres across the United States on October 15 and 16 at 7:30 pm local time. The theatre event will also feature an exclusive behind-the-scenes look about the creation of this breakthrough live-action event, an in-depth interview with director Shusuke Kaneko, who also directed “Death Note,” and a unique profile of the cast. “Death Note” and “Death Note II: The Last Name” are based on the best-selling supernatural action mystery manga written by Tsugumi Ohba and illustrated by Takeshi Obata. The story begins on the heels of the first movie as Light Yagami joins the investigation team in pursuit of the serial killer known as “Kira.”   Light Yagami finds the Death Note, a notebook dropped by a rogue Shinigami death god named Ryuk. Any human whose name is written in the notebook dies, and now Light has vowed to use the power of the Death Note to rid the world of evil. But when criminals begin dropping dead, the authorities send the legendary detective L to investigate, and he is soon hot on the trail of Light, who must now reevaluate his once noble goal. While L still strongly suspects that Light is “Kira,” Light tries to uncover L’s real name so he can kill him with his Death Note. Confusingly enough, a new rash of murders all around the world are taking place, with a “Second Kira” claiming responsibility. Light learns the identity of the Second Kira and suggests they join forces to get rid of L. Will L be able to catch “Kira” before he is killed? Who will be the last name written in the Death Note book?
Continue Reading
Advertisement
You may also like...
Related Topics: