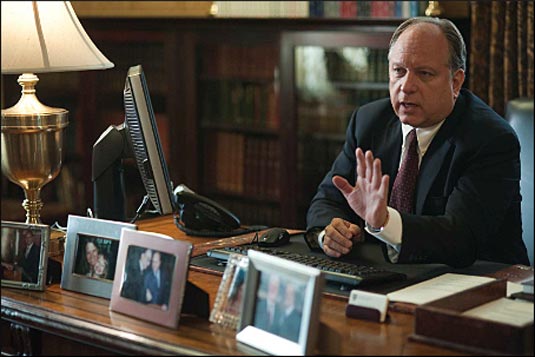 Manager Douglas Urbanski usually does his work behind the scenes, making deals for such clients as Gary Oldman and executive producing such films as Tinker Tailor Soldier Spy, but now Urbanski is stepping in front of the camera, joining Oldman in RoboCop, MGM’s remake of the 1980s sci-fi classic. The movie, which stars Joel Kinnaman as the cyborg policeman and Oldman as his scientist-creator, begins shooting in Toronto later this month. Urbanski will play the mayor of Detroit, the city that hosts RoboCop. This isn’t Urbanski’s first wade into acting waters. You probably remember him as the dismissive, stuck-up and haughty Harvard president Larry Summers in David Fincher’s The Social Network. As was the case with Social Network, sources say the offer for the RoboCop part came out of the blue with a call from the studio urged by the film’s director, Jose Padilha.

“I think every agent, every manager should do this to see what the other side is like,” says Urbanski who, prior to becoming a manager, was a theater producer with multiple Tony nominations. “This way, they will never think a client is crazy when they get a call from the set with crazy demands.”

Speaking of, what do you think about celebrities’ star-complex, do you find some of them unnecessarily demanding too much, or do you find that justified?
Continue Reading
Advertisement
You may also like...
Related Topics:David Fincher, Gary Oldman, Joel Kinnaman, José Padilha, robocop, The Social Network, Tinker Tailor Soldier Spy