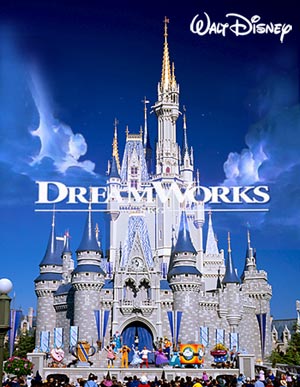 The Walt Disney Studios has agreed to a long-term exclusive distribution deal with Steven Spielberg‘s DreamWorks SKG movie studio. Under the terms of this arrangement, Disney will handle distribution and marketing for approximately six DreamWorks films each year. The first DreamWorks motion picture to be released under the Touchstone Pictures banner is scheduled to hit theaters in 2010. The deal comes after Universal and DreamWorks had been unable to finalize their previously announced distribution arrangement. DreamWorks left Paramount in October to re-establish DreamWorks as a privately operated company. Commenting on the announcement, Dick Cook said:

“We’re both thrilled and honored to be marketing and distributing all of DreamWorks’ signature upcoming live-action motion pictures, and to begin a new relationship with such respected colleagues as Steven, Stacey, and their creative team at DreamWorks. Steven has made some of the biggest and most loved films of all-time, and continues to be one of the great icons of our industry. Stacey has an impeccable reputation and a phenomenal track record for making a wide variety of quality films. Their motion pictures will be the perfect complement to the already robust slate of Disney and Touchstone films being made by Oren Aviv and his team.”

“We are tremendously pleased to join forces with Steven Spielberg, whose artistic vision and commitment to quality filmmaking are legendary. DreamWorks has had a great creative and commercial track record under the leadership of Steven and Stacey Snider and I am delighted they’re now associated with Disney.”

“Disney is the birthplace of imagination and has always been as close to the worldwide audience as any company ever has. I am so pleased that industry leaders like Bob Iger and Dick Cook reached out to become our distribution partner. This is a major step forward for us and Reliance.”

Continue Reading
Advertisement
You may also like...
Related Topics:Steven Spielberg