Connect with us
Edi Gathegi, who played the vampire Laurent in Twilight and The Twilight Saga: New Moon, will play a biracial mutant named Darwin in X-Men: First Class, reports Deadline. 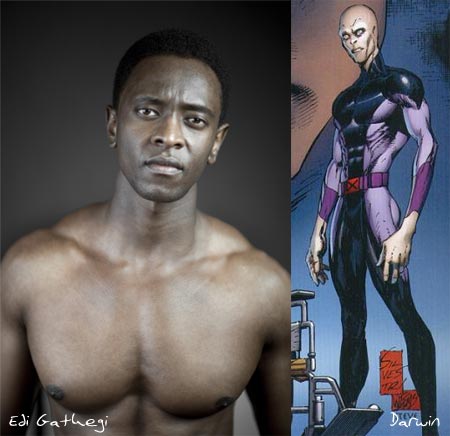 Darwin has the power of “reactive evolution,” which allows him to adapt to any situation or environment. Deadline also reports that Aaron Johnson is still rumored to play the role of Cyclops although EW says Johnson’s he’s not playing Cyclops or any other role in the movie. EW also said that Fox is releasing the names of characters who aren’t in the film so that it will be a surprise for fans when it’s announced which roles the actors are really playing. X-Men: First Class, following the classic Marvel mythology, charts the epic beginning of the X-Men saga. Before Charles Xavier and Erik Lensherr took the names Professor X and Magneto, they were two young men discovering their powers for the first time. Before they were archenemies, they were closest of friends, working together, with other Mutants (some familiar, some new), to stop the greatest threat the world has ever known. In the process, a rift between them opened, which began the eternal war between Magneto’s Brotherhood and Professor X’s X-Men. Gathegi joins a cast that also includes Michael Fassbender, Jennifer Lawrence, Alice Eve, Nicholas Hoult, Caleb Landry Jones, Lucas Till, and Kevin Bacon. Matthew Vaughn is directing the film, which is being written Jane Goldman. X-Men: First Class is set to open on June 3, 2011.
Continue Reading
Advertisement
You may also like...
Related Topics:Aaron Johnson, Alice Eve, Jane Goldman, Jennifer Lawrence, Kevin Bacon, Lucas Till, Matthew Vaughn, Michael Fassbender, Nicholas Hoult, X-Men: First Class