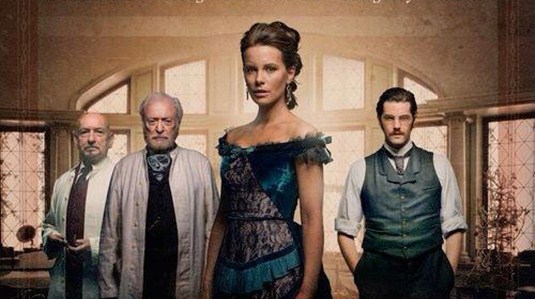 Here comes the first poster for the upcoming supernatural thriller Eliza Graves, which comes from director Brad Anderson and stars Kate Beckinsale in the leading role. Not much of a poster, but at least we have the very first look at that awesome cast, and a pretty short message that goes like this: no one is what they seem. Head inside to check it out… In case you forgot, the movie is based on Edgar Allan Poe‘s short story The System of Doctor Tarr and Professor Fether, and revolves around a Harvard Medical School graduate who takes a job at an insane asylum, unaware of the fact that it has been taken over by its occupants. In other words, Jim Sturgess plays that newly arrived Harvard Medical School grad, while Beckinsale plays Eliza, a patient at a mental institution in which the inmates have taken over and are posing as doctors. Anderson directs from a script written by Joe Gangemi, and the rest of the cast includes Michael Caine, Ben Kingsley, Brendan Gleeson and David Thewlis. Click on the poster to enlarge and make sure you stay tuned for more updates!

New Trailer And Images From ALL IS BRIGHT, Starring Paul Giamatti & Paul Rudd
Ben Stiller’s THE SECRET LIFE OF WALTER MITTY Gets Another Poster
Advertisement