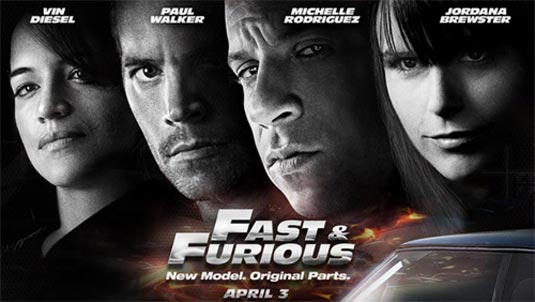 The tagline of “Fast & Furious” promises “New Model. Original Parts.” Well, yes and no. “Parts” is a remarkably apt way to describe the people of the movie, a crew of affectless hard bodies reunited from the 2001 B-movie sensation “The Fast and the Furious.” Led by Vin Diesel, an inexpressive chunk of man whose actorly range is largely restricted to the occasional furrowing of a brow, the cast is slotted into a narrative involving revenge against a Mexican drug cartel, outlandish vehicular mayhem, flaunting of custom bodywork (both automotive and anatomical) and settings that encourage people to wear tank tops…read more [The New York Times] Recession has hit the world of B movies: There’s no longer a budget for definite articles in titles. Fast & Furious, about dirtied-up car racing and badass drivers, arrives eight years after The Fast and the Furious revealed the unlikely charms of the sewer-throated, shovel-headed Vin Diesel. Back then, as Diesel’s Dominic Toretto burned through L.A. streets, we gasped, Who is that walking Popeye, and why does he sound like he’s in a Sylvester Stallone tribute band? Back then we also met Dom’s nemesis, Brian O’Conner (Paul Walker), an equally feisty driver (and, as it happened, an undercover cop) as blond and blue-eyed as Toretto was bald and swarthy…read more[EW] 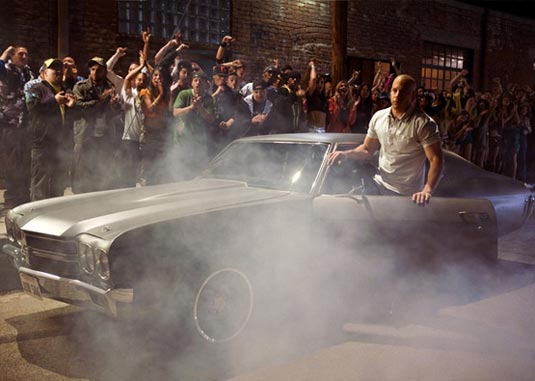 Fun is the operative word for me. In none of the earlier F & F films was there ever a sense of fun. To me, they always felt like they were trying way to hard to be cool, believable and current. This shortsightedness is already evident should you watch the earlier films. The high tech goodies (DVD players, not Blu-ray?) are already dated, as are the hit-of-the-moment soundtrack choices. And the colors of the cars! The undeniable stars of the show! Paul Walker’s choice of fluorescent green may’ve been hip in 2001 – now it just seems silly…read more [UGO] The plot concerns drugs coming across the border, murder, revenge, and the FBI. But nobody cares. That’s a combination of not having the actors or the strength of storyline to keep us on the hook when the key is out of the ignition and the fact that people only want to see this for the fast cars doing unbelievable things. Are we interested in whether Paul Walker and Jordana Brewster can reconcile their broken relationship or if Vin Diesel can continue to stay one step ahead of the law? Not really. And if we were, these actors aren’t convincing enough in those capacities…read more [Get The Big Picture] It is no small irony that this righteous ode to muscle cars — and a bygone era when all America wanted from its wheels was speed, power and pumped-up style — comes to theaters just as the U.S. auto industry is imploding, in part because it too was clinging to the memory of what was. All of which turns “Fast & Furious” into a strange piece of nostalgia, where, without apology, fast cars still rule and fuel is burned with abandon…read more [LA Times] A lot of beautiful cars of various makes and vintages comprise the supporting cast. In the background, there are also some human women. Michelle Rodriguez is back again as Dom’s girlfriend, Letty, and Jordana Brewster returns as Dom’s sister (and Brian’s love interest), Mia. A new addition is the Israeli model Gal Gadot (great name) as one of the Mexican women in Arturo Braga’s crew. It is she who asks Dom, “Are you one of those boys who prefer cars to women?” The fact that he has to think about for a few seconds made me wonder if he was going to be honest and say yes…read more [Cinematical] 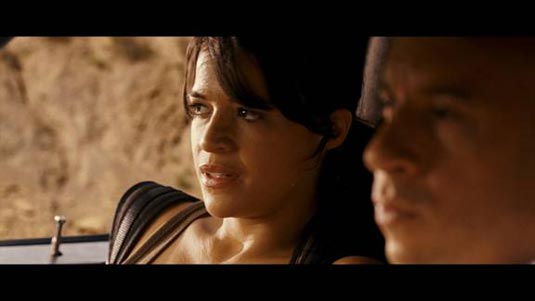 It’s disappointing that Diesel has misspent the fortune that was handed to him after the success of The Fast and the Furious and xXx. He was projected as the musclehead that would bring back the days of the big action hero. That didn’t pan out. To this date his most versatile performance is from the little seen Find Me Guilty by director Sidney Lumet. Walker and the rest of the support staff don’t elevate the material either. Even the bad guys, John Ortiz and Laz Alonso, are standard variety hoods…read more [Popcorn Junkies] The babes don’t stand a chance against the cars. Muscle or import, they’re all sex objects (props to the Lamborghini LM002). Director Justin Lin (Tokyo Drift) still hasn’t learned film geography. Even the kinetic tunnel races, meant to nitrocharge the movie, fall flat from spatial incoherence. You barely know what’s happening, and to whom. And yet I can see why Fast and Furious might be a smash as audiences look for escape from a broken economy. All those wheelies and power slides are designed to obliterate thought, not provoke it. Talk about a movie for its time…read more [Rolling Stone] [youtube]http://www.youtube.com/watch?v=e4jr1wCtmaA[/youtube]
Continue Reading
Advertisement
You may also like...
Related Topics:Brian O'Conner, Fast and Furious 4, Gal Gadot, John Ortiz, Jordana Brewster, Michelle Rodriguez, Paul Walker, Vin Diesel