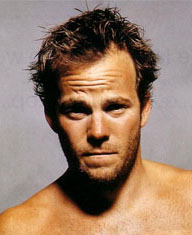 We’ve got the trailer for “Felon” and one clip from the movie which is dues in theaters on July 18, 2008. Wade Porter (Stephen Dorff) with a promising future loses everything when he accidentally kills the burglar who broke into his home. But his life, and that of everyone he loves is threatened and possibly gone forever. Wade ends up in a hellish facility run by Lt. William Jackson (Harold Perrineau), known as the SHU (Security Housing Unit) where the inmates are brutal but far less deadly than the guards. His cellmate, John Smith (Val Kilmer) is a stone cold prison legend, a ‘lifer’ and a man once devastated so completely that he has nothing left to lose and acts accordingly. An unlikely bond develops between the two men as Wade struggles to survive, having to put his own life – and the possibility of ever being freed – in relentless jeopardy. Director/Writer: Ric Roman Waugh Starring: Stephen Dorff, Val Kilmer, Sam Shephard, Harold Perrineau, Marisol Nichols Release Date: July 18, 2008 “Felon” clip
Continue Reading
Advertisement
You may also like...
Related Topics:Harold Perrineau, Ric Roman Waugh, Stephen Dorff, Val Kilmer