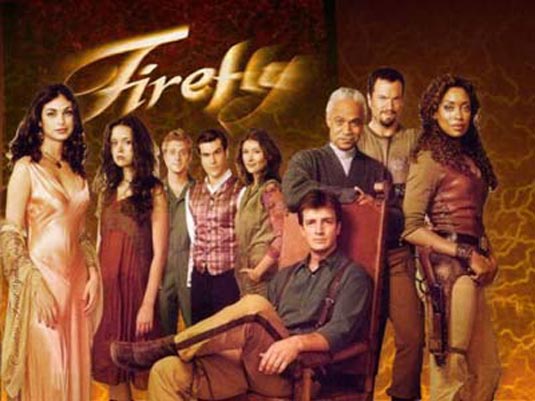 Browncoats will have something extra special to celebrate at Comic-Con this year. The entire cast and crew of the epic cowboy-sci-fi Firefly will reunite for a special 10-year anniversary panel Friday, July 13 at 12:30 PM in Ballroom 20. The Science Channel, which has been airing reruns of this cult series, is bringing together series creator Joss Whedon and stars Nathan Fillion, Alan Tudyk, Adam Baldwin, Sean Maher, and Michael Fairman (ok this doesn’t sound like an ‘entire cast’ to me, too, but the sources said so). The panel will include never-before-seen footage from the short-lived series, plus a number of surprises. Firefly debuted on Fox in the fall of 2002, and canceled in 2003 after airing just 14 episodes (Seeing his success with The Avengers, I bet you regret that now, Fox, hmmm?!). Despite the short run, the series has a massive cult following of fans, known as Browncoats. The show was also brought to the big screen in 2005 with Serenity, also written and directed by Joss Whedon and having the same cast (misssing in the above statement are Summer Glau, Gina Torres, Morena Baccarin, Jewel Staite, of the ‘regulars’) . Stay tuned for updates on the cast!
Continue Reading
Advertisement
You may also like...
Related Topics:Alan Tudyk, Joss Whedon, nathan fillion, The Avengers