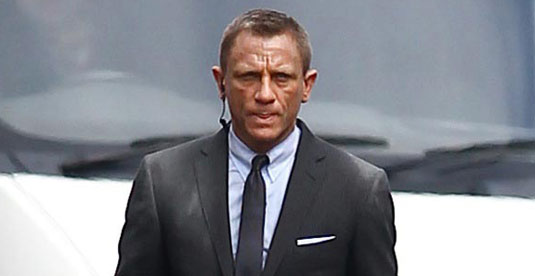 After we saw Daniel Craig as James Bond and Judi Dench as M, we finally have our first look at Javier Bardem as villain in Skyfall.

Ok, he looks tough (well, as always) but blonde Bardem…I didn’t expect that. But let me guess, he’s just disguised for this particular scene as a member of the Metropolitan Police?

Anyway, we learned Bardem’s character is called Silva, which isn’t a big deal, I think.

Oh, and I must admit I can’t wait to see some photo of Ralph Fiennes in Skyfall.

In addition to London, the crew will hit the streets of Scotland, Shanghai and Istanbul.

So, in the upcoming Sam Mendes‘ directed movie Bond’s loyalty to M is tested as her past comes back to haunt her. As MI6 comes under attack, 007 must track down and destroy the threat, no matter how personal the cost.

Naomie Harris, Albert Finney, Ben Whishaw and Helen McCrory make the rest of the cast of the movie which is set to open on November 9th, 2012.