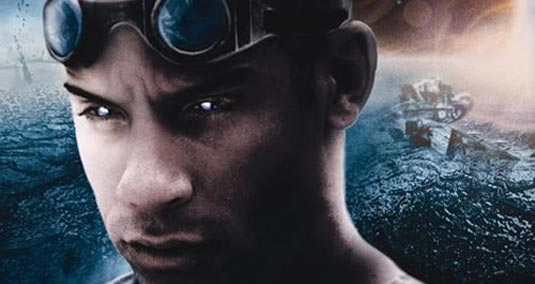 Although a release date has not yet been set for writer/director David Twohy‘s Riddick, starring Vin Diesel, the filmmaker has posted this update with a first look at the logo for the film. Check it out below!

“Been pulling 14-hour days trying to finish RIDDICK. My typical day starts at 9am with intensive visual effects meetings, sweating out the details of our 900 VFX shots. Then I jet across town to the mix stage, Soundelux, where I supervise the sound, balancing out the often-competing elements of music, sound fx, sound design, and dialog. At night I hit the lab, Technicolor in Hollywood, staying until midnight to do “DI work” — color-correction of the movie. This is where David Eggby and I have one last chance to get the images right, dropping in grads and power windows to finesse what we shot on set. It’s a great tool, the Digital Intermediate. Kind of like Photoshop for movies. Gotta love it. Gotta love the challenge of bringing it all home.”

The latest chapter of the groundbreaking saga that began with 2000’s hit sci-fi film “Pitch Black” and 2004’s “The Chronicles of Riddick” reunites writer/director David Twohy (“A Perfect Getaway,” “The Fugitive”) and star Vin Diesel (the “Fast and Furious” franchise, “XXX”). Diesel reprises his role as the antihero Riddick, a dangerous, escaped convict wanted by every bounty hunter in the known galaxy. The infamous Riddick has been left for dead on a sun-scorched planet that appears to be lifeless. Soon, however, he finds himself fighting for survival against alien predators more lethal than any human he’s encountered. The only way off is for Riddick to activate an emergency beacon and alert mercenaries who rapidly descend to the planet in search of their bounty. The first ship to arrive carries a new breed of merc, more lethal and violent, while the second is captained by a man whose pursuit of Riddick is more personal. With time running out and a storm on the horizon that no one could survive, his hunters won’t leave the planet without Riddick’s head as their trophy.