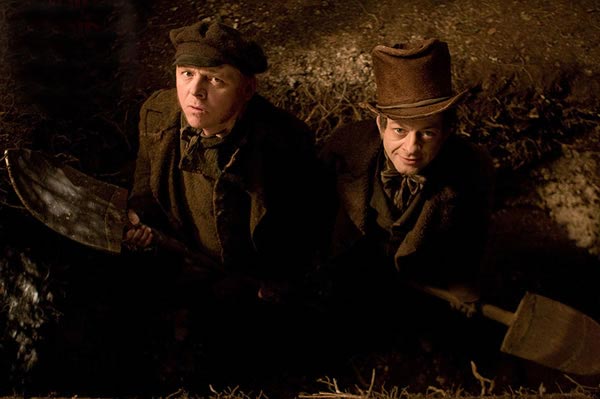 The first official image from the upcoming black comedy, Burke & Hare, which is currently filming, has just been released. Burke & Hare plot synopsis: William Burke and William Hare are scratching out a living in 1830s Edinburgh. After yet another failed business venture, they return to Hare’s lodging house to find that their tenant has suddenly died on rent day. As the boys decide how to dispose of the body over a drink, they discover that a corpse can fetch a hefty price. Edinburgh is the centre of the medical universe and the city’s doctors are crying out for more cadavers for their educational lectures. First they try the infamous DR. MONRO, but he’s not interested, so they sell the corpse to DR. KNOX, his vain and ambitious rival who urges them to bring any more ‘unfortunates’ they may stumble upon. Entrepreneurial Hare is quick to realize they’ve hit on a great money making venture and despite the more sensitive Burke’s misgivings, they embark on a series of plans to secure more bodies. They arrange a series of deadly ‘accidents’ for the local unfortunates and to celebrate their success, they go out on the town to celebrate. There, Burke meets GINNY, a beautiful and spirited aspiring actress. Drive on by the promise of romance, Burke agrees to step up their operation; branching out into “ethical” murder. The professional rivalry between Knox and Munro is creating a very lucrative trade for the boys as Knox needs extra bodies for his groundbreaking photographic map of the human body. In a series of hilarious comic misadventures Burke and Hare begin to secure a steady stream of bodies and the cash starts rolling in. With the authorities closing in, Hare promises Burke he’s got a new plan; they just need a bit more money and then they can go legit and open a funeral parlour. The pressure builds when Knox is arrested after dissecting some well known locals and he immediately implicates Burke and Hare as his supplier of fresh corpses. Burke and Hare sweat it out in the cells as a crowd gathers baying for bloody. In a wild, but romantic gesture, Burke volunteers to take the rap to save his friend and the love of his life, Ginny. As the hangman’s noose goes around his neck, our hero is smiling bravely and when asked for his final words, he pronounces “I did it for love.” Simon Pegg and Andy Serkis play William Burke and William Hare respectively, also stars Isla Fisher, Tim Curry, Tom Wilkinson, John Cleese, and Stephen Merchant. Burke and Hare, directed by John Landis (The Blues Brothers, Spies Like Us, Beverly Hills Cop III ), will be released to theaters later this year.  [source: EmpireOnline ]
Continue Reading
Advertisement
You may also like...
Related Topics:Andy Serkis, Burke and Hare, john cleese, John Landis, simon pegg, Tom Wilkinson