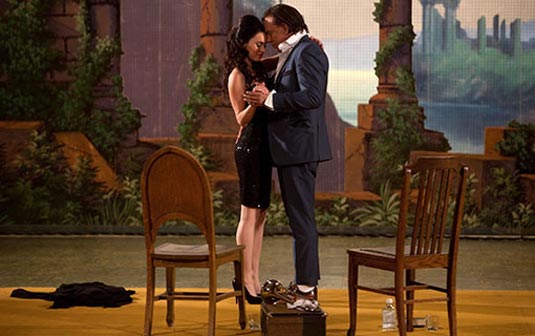 EW has revealed the first photo of Mickey Rourke and Megan Fox from thier upcoming Passion Play thriller and spoke to Rourke about his involvement. Set in 1950s Los Angeles, the film follows a beautiful angel stuck under the thumb of a ruthless gangster. The angel is saved by a trumpet player that is down on his luck. Mickey Rourke is set to play the trumpeter, and Megan Fox will play the angel. Bill Murray is starring as the villain, he playing a gangster named Happy intent on keeping the two apart. Speaking about Fox’s character, Rourke said:

“She has wings, so she was sort of an oddity trapped in a carnival act. She’s been a prisoner her whole life, and she has no understanding of trust. She’s very vulnerable and delicate.” As for Fox herself, well sounds as if Rourke liked her as he said “I think the pleasant surprise was this girl who’s a world-class beauty turned out to be probably the best young actress I’ve ever worked with. I don’t know if a lot of her films have showcased her acting ability more than, say, being action-oriented, but she really stepped up the plate with this one and was very consistent and professional, beyond her years. At 23, I couldn’t do half of what she’s doing.”

His character in Passion Play seems similar to Randy the Ram from The Wrestler in that they are both seeking redemption. Rourke commented on this and also said some surprising things about his co-stars from that and their lack of chemistry,

“Well, The Wrestler was quite tough. There wasn’t much chemistry there. Uh, that’s a whole other conversation. With Megan and I, there’s a lot of chemistry and a lot of respect. We’re both comfortable with each other. As far as the redemption is concerned, it’s almost fate.”

He also spoke about Bill Murray who plays the gangster in control of Fox,

“Bill came aboard after another actor (Toby Kebbell) pulled out, and I think his unpredictability was a very interesting choice on Mitch’s part. It made me scratch my head in the beginning, but I kind of like the fact that Mitch went against the grain and didn’t use a Hollywood stereotype. Less is more. Bill Murray isn’t your typical scary, spooky guy, and there’s something very unnerving about a guy with a sort of off-the-wall sense of delivery. It’s very unexpected. Some of your worst gangsters are guys who were very low-key.”

Mitch Glazer, the screenwriter behind “Scrooged” (which starred Murray), “The Recruit” and “Great Expectations,” is making his directorial debut with the picture. Passion Play will be released in U.S. theaters in 2011.
Continue Reading
Advertisement
You may also like...
Related Topics:Bill Murray, megan fox, Mickey Rourke, Mitch Glazer, Passion Play, Toby Kebbell