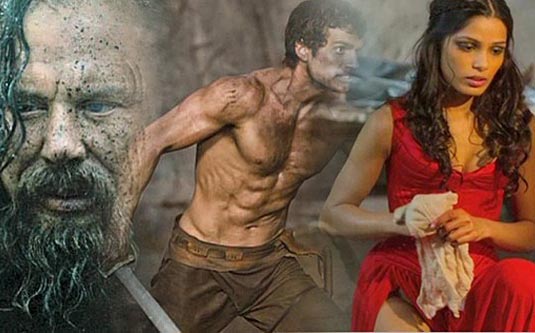 The first photos from Immortals (previously titled War Of The Gods), Tarsem Singh‘s greek gods film which is currently shot in Montreal, have hit the web. Immortals is a mythological tale set in war-torn ancient Greece where the young warrior, Theseus (Henry Cavill), leads his men into battle with the immortal Greek Gods to defeat evil and the powerful elder gods the Titans in order to save mankind. Mickey Rourke will play villain King Hyperion, Kellan Lutz will play Poseidon, lord of the sea, John Hurt will play the earthly manifestation of Zeus, who acts as a mentor and teacher to the young warrior Theseus. Isabel Lucas will play Athena, the daughter of Zeus who finds her loyalty tested as the war between the gods and Titans looms. The film also stars Freida Pinto (Slumdog Millionaire) as Phaedra, and Stephen Dorff as Stavros, a master thief. Jason Keller rewrote the original script by Christian Gudegast, based on an original screenplay by Charley and Vlas Parlapanides. Relativity Media has set November 11, 2011 (11-11-2011) as the day when Immortals will hit U.S. theaters.