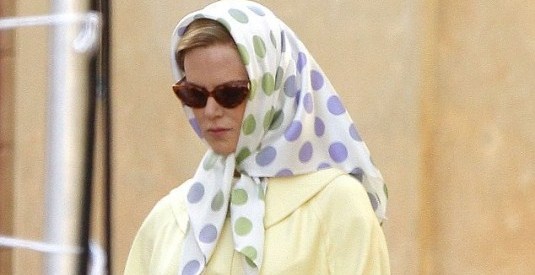 I’m not satisfied with these first set photos from Olivier Dahan‘s upcoming Grace Of Monaco movie. Simply because Nicole Kidman looks more like a drunk (than the real) princess to me. Maybe that’s ’cause she’s wearing this yellow costume, or maybe because I still think she’s simply NOT the right actress for the role? Have no idea, but I’m here to share ten pics with you – judge for yourself, and let me know what you think! As we previously informed you, Grace Of Monaco will tell us the story of Hollywood icon Grace Kelly and her life after her retirement from acting and marriage to Prince Rainier of Monaco. The movie will focus on her being a full time princess, and show us how she used her political maneuvering behind the scenes to save Monaco while French Leader Charles de Gaulle and Monaco’s Prince Rainier III are at odds over the principality’s standing as a tax haven. Dahan directs the whole thing from a script written by Arash Amel, and the rest of the cast also includes Paz Vega, Tim Roth, Frank Langella, Parker Posey and Milo Ventimiglia. So, any thoughts about this?