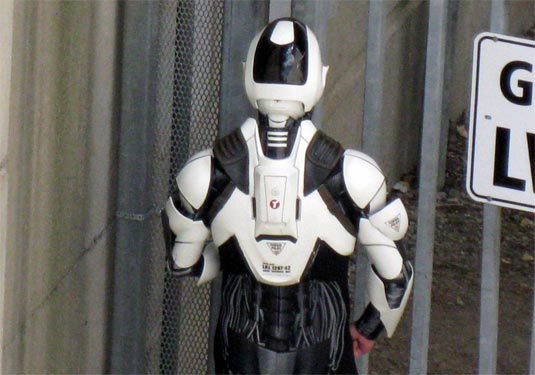 The Columbia Pictures remake Total Recall is shooting this week the Toronto Convention Centre in Toronto, Canada, and a bunch of set photos have hit the web. According to THR, the plot of this Len Wiseman (Underwold) version will swing from Mars back to the Earth. In the 1990 original, a man haunted by a recurring dream of voyaging to Mars buys a virtual dream trip from a company called Rekall Inc. and when he awakens he deems that he’s a secret agent destined to defeat a corrupt official scheming the production of air on Mars. THR says the new story will get rid of the Martian storyline and in its place involve nation states Euromerica and New Shanghai, with Douglas Quaid (Farrell) a factory worker who starts thinking he’s a spy, although he wasn’t sure for which side.

The remake stars Colin Farrell, Kate Beckinsale, Jessica Biel, Bill Nighy, John Cho, Ethan Hawke, and Bryan Cranston who plays Vilos Cohaagen, the leader of Euromerica who, under the cover of protecting his people, is secretly readying an invasion of New Shanghai. Total Recall, based on the short story “We Can Remember It For You Wholesale” by legendary sci-fi writer Philip K. Dick, is due out on August 3, 2012. (sources: This Little Film Blog, On Location Vacations, AICN)