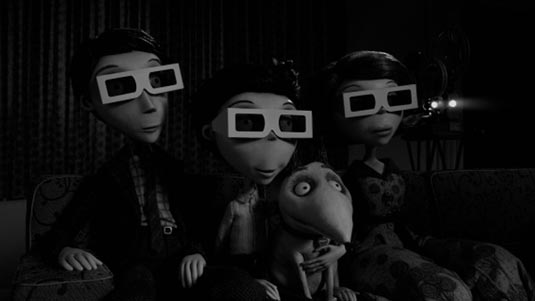 Tell me, how did you like Frankenweenie treats so far? If you loved them, here’s a new one: Walt Disney Pictures has released the first 2 TV spots. Have a look at them after the jump: TV spot #1: TV spot #2: As you surely know already, Frankenweenie is a bizzar-ish (as we’ve learned to expect from the Burton’s ingenious mind), heart-warming story about a boy and his dog. After unexpectedly losing him, the boy turns to the ‘power of science’ and resurrects the dog Frankenstein-style, hence the name of the film. With this one, Burton is going back to his stop-motion animation roots, and I must admit that I think he’s awesome at it. Directed by Tim Burton, Frankenweenie is due in theaters on October 5th, 2012 and stars the the voice talents of Winona Ryder, Catherine O’Hara, Martin Short, Martin Landau, Atticus Shaffer, Conchata Ferrell, and Tom Kenny. Sound off your opinion in comments!
Continue Reading
Advertisement
You may also like...
Related Topics:Catherine O’Hara, Conchata Ferrell, Frankenstein, Frankenweenie, Martin Landau, Martin Short, Tim Burton, Tom Kenny, Winona Ryder

DREDD Featurette: The Beauty Of Slow Motion
THE HOLE Gets a New Trailer and Domestic Release
Advertisement