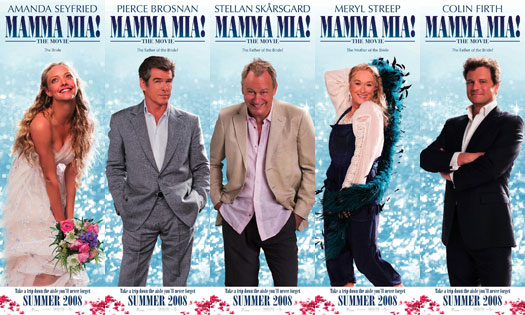 Today, we have five more posters for the upcoming “Mamma Mia!” musical, featuring the bride, mother and three men, one of which is the potential father. The story revolves around a bride-to-be (Amanda Seyfried) and her formerly rebellious mom (Meryl Streep) who raised her on a Greek island and never disclosed the identity of her father. The bride locates three men (Pierce Brosnan, Colin Firth, Stellan Skarsgard) who might be her father and invites them to her wedding. The musical features 22 ABBA songs, including “Dancing Queen,” “Take a Chance on Me” and “The Winner Takes It All.” It is scheduled to hit theaters on July 18th.
Continue Reading
Advertisement
You may also like...
Related Topics:abba