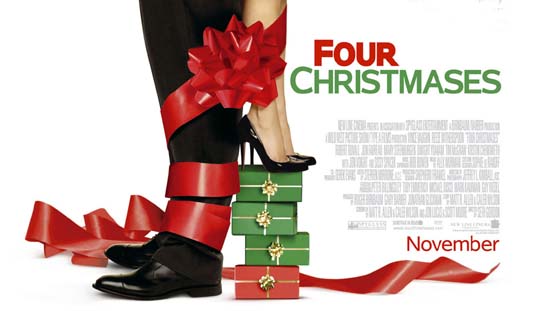 Take a look at the first TV Spot and poster for “Four Christmases” which is due to hit theaters on November 26, 2008 directed by Seth Gordon and stars Vince Vaughn, Reese Witherspoon and Robert Duvall. When upscale, happily unmarried San Francisco couple Kate and Brad find themselves socked in by fog on Christmas morning, their exotic vacation plans morph into the family-centric holiday they had, until now, gleefully avoided. Out of obligation–and unable to escape–they trudge to not one, not two, but four relative-choked festivities, increasingly mortified to find childhood fears raised, adolescent wounds reopened…and their very future together uncertain. As Brad counts the hours to when he can get away from their parents, step-parents, siblings and an assortment of nieces and nephews, Kate is starting to hear the ticking of a different kind of clock. And by the end of the day, she is beginning to wonder if their crazy families’ choices are not so crazy after all.
Continue Reading
Advertisement
You may also like...
Related Topics:Reese Witherspoon, Robert Duvall, Seth Gordon, Vince Vaughn